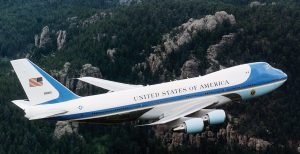 An American convoy in charge of the airport ceremony arrived at the airport on Wednesday morning, and on Thursday afternoon, some 40 US Army transport planes are expected to arrive. For the presidential visit, the planes will transport a large number of logistical equipment, including helicopters, armored vehicles, and Secret Service vehicles.

The American delegation arrived at Terminal 1 as part of the final preparations for the US President’s reception Monday morning. Mounted on the electronic board at the entrance to the airport was a sign welcoming the American convoy with flags of both countries.

On Thursday, the preparations will reach their climax with the arrival of the transport planes. More than 25 Boeing C-17s will be landing in Israel, the US military strategic transport aircraft that has been gradually replacing the Hercules aircraft, as well as two C-5 transport planes, used to carry heavy air cargo on intercontinental flights and is considered the largest transport aircraft used by the American army—the only one in the world to use it.

Five UH-60 helicopters, which are a special version of Black Hawk helicopters called White Hawk due to their role, will also arrive as part of the logistics convoy to fly the president to visit Yad Vashem and Jerusalem. They will also be joined by Black Hawk military helicopters.

The U.S. Presidential Limousine, ‘the Beast’ is transported by a C-17 for long-distance trips – D.Winslow/Wikimedia

The planes will unload secret service vehicles, security vehicles and an armored limousine to transport the president around the city, nicknamed ‘The Beast.’ A number of such identical vehicles will be arriving in Israel and are more like war tools than vehicles: the car forms a seal that keeps the passengers safe in the event of a biological or chemical attack, it is impenetrable to bullets, and the doors are made of plated steel.

The airlines have been informed in advance that during the official ceremony n Monday morning, Ben Gurion Airport will be closed for departures and landings—for a time estimated at half an hour. Due to the advance preparations, delays are not expected in the flight schedule.

(Translated and edited by N. Elias)