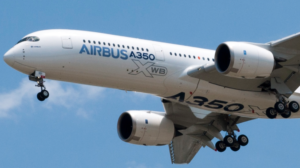 The European aerospace giant is opening an office as soon as a lease can be signed, because it sees Israel as a top source for hi-tech knowledge & development in expanding the company’s military aviation business.

European aerospace giant Airbus SE is looking for open space in Israel, The Jerusalem Post has learned, in an apparent first step by the company to procure cutting-edge Israeli technology.

Airbus’s Israel office will serve as a base to scout out and procure Israeli innovation, specifically in cybersecurity, according to multiple industry insiders who spoke to the Post.

The Airbus A380, the largest airliner- Photo: Ienac/German Wikipedia

One industry employee, speaking on condition of anonymity, emphasized that Airbus was not opening a formal office but renting out office space for three people, including in sales. One staffer will be based in Israel full time, while the two others will commute back and forth from Europe.

The office, which is opening as soon as a lease can be signed, will possibly be in Tel Aviv. It also will not be an R&D center, contrary to reports last year by business daily Calcalist, which apparently mis-characterized internal Airbus discussions and plans. But “it’s under discussion” whether the company will open a full-fledged office, an industry employee added.

Airbus is a European multinational corporation which designs, manufactures and sells civil and military aeronautical products worldwide. The company sees Israel as a top source for hi-tech knowledge and development in expanding the company’s military aviation business.

Airbus’s foray into the Israeli market comes on the heels of some 300 multinational corporations already having set up shop in the country. Many of the foreign companies seek to tap into its hi-tech ecosystem – which is home to some 5,000 startups.

In contrast to Airbus, its American competitor Boeing has had a long, robust presence in the country. Both companies are tenacious competitors and have created a duopoly in the aviation business.

Boeing opened its sprawling Israel office in 1969, and it currently holds space in Tel Aviv and at customer and supplier sites.

Boeing Israel’s president is David Ivry, serving in the role since 2003. Ivry was previously Israel’s ambassador to the United Nations, along with manning the National Security Council.

When asked whether Airbus’s reluctance to open up a formal Israel office stemmed from lingering fears over the Arab boycott, the industry employee demurred, saying it was unlikely.

It’s unclear whether El Al had considered going with Airbus’s planes instead, but until Airbus opens up an office on the size-and-scale of Boeing, it’s unlikely that the European firm can compete for El Al’s business.

Established in 1970, Airbus’s civil aerospace business is based in Toulouse, France, while its headquarters are in Leiden, Netherlands. The company offers a wide range of civilian and military aircraft.

A number of American aerospace firms and defense contractors have operations in Israel, a sign of the two countries’ burgeoning security alliance. Airbus’s foray into Israel could be a sign of closer military ties between the Jewish state and the sometimes-critical European Union.