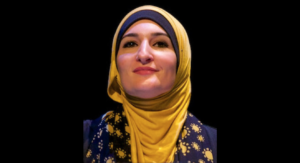 Linda Sarsour is an extremist who has “roots in [the] Muslim Brotherhood,” according to an English-language feature on Al-Arabiya, the Saudi Arabia based news channel. The article published in idiomatic English on Sunday accused the Brotherhood of “shaping the thoughts of American activist Linda Sarsour, [which resulted in] her declaring her ‘Jihad’ against US President Donald Trump.”

The unprecedented article linked her to others whom it also labeled extremists, and insinuated that the Brotherhood and groups it is allied with, including Hamas, are seeking to infiltrate the US.

The article comes in the context of Saudi Arabia’s attempt to cement relations with the Trump administration, and its ongoing conflict with Qatar and Islamist groups.

Written by Huda al-Saleh, the article sought to expose what it called “details of calls to attack Trump by US ‘Muslim Sisters’ allied to the Brotherhood.” The article began by noting that two Muslim women, Ilhan Omar and Rashida Tlaib, were recently elected to the US Congress.

However, “those sponsoring and supporting the two Muslim women to reach the US Congress adopted a tactic to infiltrate through their immigrant and Black minority communities in general,” insinuating that Muslim Brotherhood activists sought to drum up support for the Democratic candidates.

“The Democrats battle against Republican control of the US Congress led to an alliance with political Islamic movements in order to restore their control on [sic] government.” The piece asserted that the Brotherhood and “all movements of political Islam” are also tied to fighting against sanctions on Iran.

Al-Arabiya then singled out Sarsour as an example of an activist who has “appeared on the public scene” over the last decade and has problematic connections. It claimed that she became a familiar face at the White House during the Obama administration, appearing at seven meetings and that she received a “hero of change” award from Obama in 2012.

“The paradox here is that the description of the ‘Obama’ award is similar to the title of Youth and Change, the first book taught by Sheikh Ahmed Yassin, the spiritual leader of Hamas, the military arm of the Muslim Brotherhood in Palestine.” The actual title of the Obama award was “Champion of Change.”

The article then looked at Sarsour’s background, noting that she was the president of the Arab American Association of New York. Al-Arabiya asserted that it was “created by Palestinian Ahmed Jaber, a member of the Qatar International Foundation.” Saudi Arabia is currently embroiled in a major dispute with Qatar, and has accused the Persian Gulf emirate of funding the Brotherhood. The article claimed that the association was investigated “for its links to terrorism and extremism, especially its links with the Muslim Brotherhood and Hamas.”

Under the headline “Sarsour activities with Muslim Brotherhood,” the feature detailed a series of events attended by the activist. It claimed she went to the International Network of Muslim Brotherhood in North America in 2016 which was “organized by the Islamic Circle of North America.” In 2018, groups in Canada raised concerns about Sarsour’s participation at another ICNA event, according to The Canadian Jewish News.

But Al-Arabiya pointed out that Sarsour appeared next to Samah Safi Bayazid, who had posted a photo with Turkish president Recep Tayyip Erdogan on her Twitter account. In this roundabout explanation, the article sought to link Sarsour to Siraj Wahhaj, a “pioneering Islamic preacher in New York.” Unsurprisingly, the article then claimed that Wahhaj – “whom Linda Sarsour has admired and who in turn influenced her” – has been in the spotlight for being arrested in New Mexico.

Sarsour was also accused of using the term “jihad” during a speech about Trump. “These are terms used by the Muslim Brotherhood teachings and in the views of Sayyid Qutb,” the article claimed, going on to then link the same terms “used and preached also by [the] al-Qaeda terrorist organization.”

The article labeled Sarsour an “Islamist activist” for this speech, and asserted that her support of human rights is coded within use of terms that are also used by extremists. “What Linda Sarsour has said is not far from those [words] of Zainab al-Ghazali, one of the most prominent women of the Muslim Brotherhood.”

The Al-Arabiya piece then claimed the Muslim women it mentioned in the beginning are part of a network of “sisters” who were supported by Obama and are opposing Trump’s foreign policy, including his opposition to Iran’s regime, as well as the “fight against political Islam groups and Trump’s choice of Saudi Arabia under the leadership of Kind Salman bin Abdulaziz and Saudi crown Prince Mohammed bin Salman as a strategic ally.” This claim – that Sarsour is part of the opposition to Trump and therefore to the US-Saudi alliance – was the heart of the piece.

The article concluded with a claim that the Muslim Brotherhood in 1987 authored an Empowerment Memorandum “based on the realization of the overall strategic objective of the Muslim Brotherhood in North America, namely, the establishment of an Islamic movement led by the Muslim Brotherhood that embraces Muslim issues locally and globally.” The second agenda of the document is that it sees this work in America as “a kind of great jihad in the removal and destruction of Western civilization.” The recruiting of “Muslim sisters” is part of their goal.

The piece slamming Sarsour and her allies appeared in the context of Saudi Arabia’s attempt to bolster its close connection to the Trump administration and its opposition to Qatar. It also came in the context of the Kingdom’s shift away from political Islam and its opposition to Islamist groups, especially the Muslim Brotherhood. Riyadh’s allies in Egypt and elsewhere have been among the harshest critics of the Brotherhood, which they see as an existential threat to the region. If the Brotherhood recruits activists in the West under the guise of human rights activism, it will damage the kingdom: this was the main thrust of the expose.