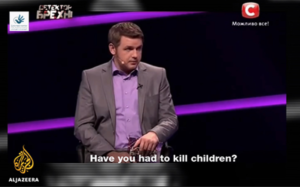 Despite being refuted as untrue almost 4 years ago, the anti-Semitic Qatari-based TV channel still aired a report of a Ukrainian woman who claimed to have volunteered for the IDF and killed civilians—including children—during her military service for Israel.

The Qatari-based Al Jazeera TV network aired an investigative report last week showing an Israeli-Ukrainian woman who alleged that she murdered civilians and children while serving in the IDF.

The woman, Elena Zakusilo, did volunteer for the IDF and served in a junior administrative position, but her testimony, which was proven to be false shortly after it came out, was taken from a Ukrainian TV show called Lie Detector and aired in November 2013.

The video clip featured in the report shows the Lie Detector host asking Zakusilo how long she served in the IDF, to which she responds “six years.”

Later, he asks her whether she was a professional soldier, and whether she was still working for Israeli military and intelligence, with Zakusilo responding “yes” to both questions.

“There’s an Israeli airline in the city of Boryspil, backed by the Israeli embassy. I provide protection to the Jews on this airline,” she explains in the clip.

The Lie Detector host follows up by asking whether she killed people. She responds “yes,” and the lie detector on the show determines she is speaking the truth.

“The first time I killed was difficult for me. I threw the weapon, and said I wasn’t going anywhere. But I went,” she elaborates.

The host then asks whether she was willing to return to service in the Israeli army and to killing its enemies, and whether she was asked to kill children. She responds in the affirmative to both questions. When asked how many people she killed, she says she doesn’t know.

Zakusilo’s story was refuted in late 2013. At the time, the story caused outrage among the Muslim community in Ukraine, leading Israel to examine the matter with the IDF, eventually learning Zakusilo was lying.

The findings were transferred to Ukrainian authorities. At the same time, the Ukrainian security services conducted their own examination of the matter, which found in December of that year that Zakusilo was in fact lying on live television.

“Elena Zakusilo did not participate in military confrontations, including between Lebanon and Israel,” the Ukranian security services said at the time. “Everything she said on Lie Detector does not conform to reality. Her answers on the show were given based on a script prepared by the main editor of the TV show.”

Then-Foreign Ministry spokesman Yigal Palmor examined the matter, finding that while Zakusilo did serve in the IDF, she had a junior administrative position and was never involved in the kind of combat activities she described.

After the Government Press Office learned of the Al Jazeera story, GPO director Nitzan Chen contracted Al Jazeera’s bureau chief in Israel, Walid Omary, demanding to know why the clips from the show were included in a story aired some four years after Zakusilo’s testimony was proven to be false.

Omary confirmed on Monday that he received an inquiry about the report and has passed it on to the network for clarification.