Saudi, Egyptian citizen purportedly launched the attack that killed an Israeli worker, video shows; over 30 rockets fired from Gaza in past day, at least six Palestinians killed in IDF strikes on the Strip.

An al-Qaida-linked group calling itself “The Shura Council of Mujahideen in the Holy Land” claimed responsibility Tuesday for a cross-border-attack along Israel’s southern border that killed one construction worker on Monday.

Reuters obtained a video showing a group of masked men who claimed responsibility for the attack. The masked men used Islamic slogans, pledging to liberate the Holy Land from what they termed Jewish control. 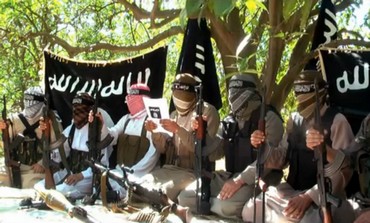 A second video showed two men, one of whom said they were about to embark on a mission to attack “the Zionist forces on the border of Egypt and occupied Palestine”, an apparent reference to Monday’s incident on the Sinai border.

The first man said he was an Egyptian named Abu Salah al-Masri. The other said he came from Saudi Arabia and gave his name as Abu Huthiyfa al-Rathali. The videos could not immediately be verified.

Meanwhile, Some 30 rockets and mortar shells pounded southern Israel on Tuesday, in one of the worst days of violence in months. Israel was expected to escalate its response and Defense Minister Ehud Barak held security consultations late Tuesday night to review various options

Seven of the rockets landed in the Lachish region and 22 landed in the Negev. All of the rockets fell in fields. Police bomb squads spent the day searching for rocket impact areas to recover the projectiles’ remains. No one was hurt in the attacks but residents in the Ashkelon and Sdot Negev regions were ordered to stay close to bomb shelters throughout the day.

Israel was concerned with the increase in rocket fire and particularly with Hamas’s declared involvement in the attacks, a clear break from its earlier policy not to attack Israel as was demonstrated during the last round of violence with Islamic Jihad  in March.

While attacking Israel along the border with the Gaza Strip, Hamas has refrained from firing its long-range Grad-model Katyusha rockets into Israeli cities. Instead, it allowed other groups, such as Islamic Jihad or the Popular Resistance Committees to fire into Israel.

In the afternoon, the Israel Air Force attacked a motorbike in the central Gaza Strip, wounding one person, who the IDF said was involved in the rocket fire into Israel.

Iron Dome batteries were deployed throughout the South but by the evening had not been activated. The IDF said that the batteries were on high alert and were prepared to defend the cities they surrounded.

Hamas claimed that it was responding to the killing of Palestinians in recent days. The IAF killed at least six Palestinians since Monday, when it launched a series of airstrikes against a sniper and rocket cell.

“The more things deteriorate, the closer we come to a decision we don’t want to make,” Deputy Prim Minister Silvan Shalom said. “The prospect of a ground operation (in the Gaza Strip) shouldn’t frighten us.”

“If this situation escalates, and I hope it won’t, then all options are open. They know it. We know it. The international community knows it,” he told Israel Radio.