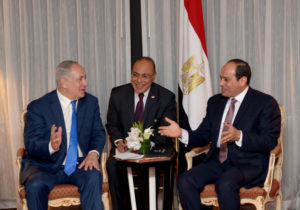 Having become successively involved in recent efforts to stabilize the situation in Gaza, in bringing about a Fatah-Hamas reconciliation, Egypt reaches out to PM Netanyahu, offering his services to do likewise vis-à-vis the Israel-Palestinian conflict.

NEW YORK – It is not every day that Prime Minister Benjamin Netanyahu meets leaders of Arab countries publicly and with cameras capturing the moment.

In fact, it has hardly ever happened in the eight years since Netanyahu became prime minister for the second time in 2009. And that is precisely why the 90-minute meeting in New York on Monday evening with Egyptian President Abdel Fatah al-Sis was so significant.

In this case the visuals – Netanyahu and Sisi sitting next to each other smiling, shaking hands – is what is important.

Though Netanyahu met twice in secret in 2016 with Sisi – once in Aqaba with then-secretary of state John Kerry and Jordanian King Abdullah, and another time in Cairo with Zionist Union head Isaac Herzog – this was the first time he did so in public. The last time an Egyptian president shook hands publicly with an Israeli leader was in the days of deposed president Hosni Mubarak.

That is the good news.

The bad news is that those neighbors – including the neighbors like Egypt and Jordan with which Israel has peace treaties – are not willing to take those ties out of the closet and into full public view.

The reason given is that if the leadership of these countries would make the ties public, they would face a wave of angry backlash from their publics not ready for cooperation with Israel.

But this is circular reasoning, because only when the leaders make their meetings with Israelis public will the message filter down to the street and perhaps incrementally change public attitudes toward Israel. This may take long years and a peace deal with the Palestinians, but without positive cues from the top, it will take even longer.

Egypt, Jordan, Saudi Arabia, the United Arab Emirates and other Gulf countries are benefiting from security and intelligence cooperation with Israel as they face with Israel the common enemies of Iran and radical Sunni terrorism. At the same time, however, they have until now not been willing to give Israel something important to it in return – public recognition of those ties.

By meeting Netanyahu publicly, Sisi is acknowledging what everybody knows – that Egypt has an important and significant relationship with Israel. The fact that he no longer feels the need to hide this may lead others to do the same.