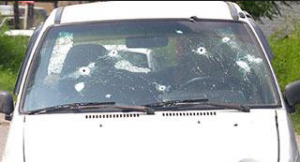 Arab terrorist tried to run over IDF soldiers, who avoided the oncoming car & opened fire killing the Palestinian terrorist.
• Large knife was discovered in the vehicle.

A terrorist tried to run over IDF soldiers at the entrance to the village of Ofra, in the Binyamin region. The soldiers were able to avoid the vehicle and opened fire at the terrorist, killing him.

In a search of the vehicle after the terrorist was neutralized, a large knife was found, and it is believed the terrorist planned to carry out a bigger attack. There were no Israeli casualties in the incident.

Earlier, a Palestinian terrorist attempted to run down Israeli police and soldiers using his car at the Qalandiya checkpoint, near Ramallah. In this case too, the terrorist was shot and wounded without causing Israeli casualties.

The incident occurred close to Qalandiya refugee camp, where soldiers on Wednesday shot dead two Palestinians who tried to ram their cars into troops in separate attacks.