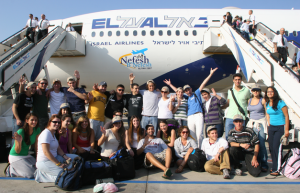 The first of the Summer 2016 chartered Nefesh B’Nefesh planes is scheduled to arrive on Tuesday, carrying 220 olim who chose to turn down potentially lucrative job offers.

Some 220 North American Jews are expected to make aliyah Tuesday on a chartered plane under the auspices of the Nefesh B’Nefesh organization.

The organization says it plans to fly almost 2,000 olim from Canada and the United States this summer, joining the 45,000 who have made aliyah through the organization over the years.

According to organizers, the flight includes single men and women who went to prestigious universities and who, despite having lucrative job offers, decided to realize their Zionist dream. One oleh on the flight is a man in his 70s and some 31 olim on the flight plan to live in the Negev Desert or the Galilee.

Nefesh B’Nefesh was founded in 2002 as a non-profit organization. According to its website, its core mission “is to revitalize aliyah and to substantially increase the number of future olim by removing the professional, logistical and financial obstacles that prevent many individuals from actualizing their dreams.” Its aliyah efforts are coordinated with the Jewish National Fund, the Immigrant Absorption Ministry and the Jewish Agency for Israel.

Government Processing and Advocacy Department Director Zev Gershinsky told Israel Hayom that the flight will kick off an “airlift that will comprise some 2,000 olim.” He added that “the summer months are a peak period for the organization; we are working around the clock to facilitate their aliyah and absorption process.”