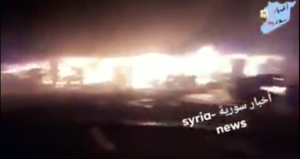 The agency had earlier reported “explosions” in the southern suburb, while state television broadcast images of fires in the area targeted by the strikes.

There was no comment on the strikes from the Israel Defense Forces (IDF), which rarely confirms or denies its operations in Syria.

However Israel’s Transportation and Intelligence Minister Israel Katz implied Wednesday that Israel was behind the strikes, saying hours after the explosions that Iran “threatened—both in public and through messengers—to hurt Israel…Only strikes now, today, could prevent violence and wars tomorrow.”

Bomb-shelter unlocked for use during alert – Photo: IsraelandStuff/PP

His statement came as the IDF ordered civilian shelters in the country’s northern Golan Heights region to be opened and called up military reserve units after observing what it described as “irregular” activity by Iranian forces in Syria.

On April 9 missiles targeted the T-4 air base in the central province of Homs, killing up to 14 fighters, including seven Iranians, two days after an alleged chemical attack carried out by the Syrian regime.

The air base was also targeted by Israel in February.

On April 29, at least 26 mostly Iranian fighters were killed by missiles fired on regime military positions, according to the Observatory.

The strikes, “probably Israeli”, targeted a military airport in Aleppo in the country’s north and Brigade 47 in Hama, where Iranian forces are stationed, the Observatory said.

In recent years, particularly since 2017, Israel has carried out numerous strikes in Syria against the regime of President Bashar al-Assad and his ally, the Lebanese Hezbollah militia.

Occasional clashes have erupted between Israel and the Syrian regime and its Hezbollah ally in the Golan Heights, occupied by Israel since 1967.

Israel is concerned that Iran and Hezbollah are embedding forces along its border.

In an interview late last month, Israeli Defense Minister Avigdor Lieberman vowed to strike at any attempt by Iran to establish a “military foothold” in Syria.