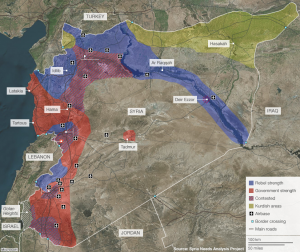 A ceasefire went into effect on Sunday in southern Syria along the border with Israel and Jordan. It covers the provinces of Deraa, Quneitra and Suweida. US National Security Advisor H.R. McMaster provided the usual boilerplate reasons behind US support for it. The United States is committed to “helping to end the conflict in Syria.” This agreement would be an “important step toward common goals.” The deal is unique in that it was agreed by the US, Jordan and Russia and came amidst G20 talks in Hamburg. Sergei Lavrov, Russia’s Foreign Minister, described the ceasefire as relating to the “de-escalation zones” that had been agreed to in Astana in May.

The ceasefire in southwest Syria is thus a unique agreement that shows Russia and the US are capable of working together in Syria, at least at the moment. After the Astana talks in May, Syria rejected US monitoring of the four “de-escalation zones” around Idlib, Homs, East Ghouta in Damascus and southern Syria. Hamidreza Azizi, an assistant professor at Shahid Beheshti university in Iran wrote on May 24 that Iran supported the de-escalation zones to enhance its prestige. He thought it would bring Tehran and Moscow closer together. Turkey’s Syrian rebel allies were outraged at Iran’s participation in Astana.

US, Russia, Jordan reach ceasefire deal for southwest Syria Video: REUTERS
Today we see the fruits of that outrage in this separate deal. It also represents the US “buying in” to southern Syria, where the US already has interests at its base in al-Tanf and in supporting Israel’s concerns along the Golan. The US won’t work with Iran, but it can work with Moscow.

Jordan has emerged as a key US ally in all of this. The King of Jordan was in Washington for his third visit with Trump administration officials, according to reports, in the last days of June. In March Abdullah II had told Trump that Jordan wanted an end to the conflict in Syria, according to a White House statement on the meeting. The June visit came at the same time as fighting flared along the Golan.

On July 6, Prime Minister Benjamin Netanyahu reportedly phoned Trump in Europe to discuss ramifications of the ceasefire. This comes amidst Israel’s warnings against Iran’s and Hezbollah’s role in Lebanon and Syria. Israel can’t be a signatory on the ceasefire memorandum, for obvious reasons since countries involved with the Syrian civil war would reject official Israeli involvement, and Israel doesn’t want to be officially involved. But Jordan and Israel’s security interests in southern Jordan dovetail, and Jordan was a key player in this deal.

“We’ll continue working with US and Russia to ensure success of ceasefire deal in south Syria and final de-escalation area plan,” tweeted Jordanian foreign minister Ayman Safadi on July 7. The goal is a comprehensive ceasefire “and political solution accepted by Syrians that safeguards integrity, independence and sovereignty of Syria,” he wrote.

So who wins and loses in the latest ceasefire? Jordan is the big winner. The kingdom has forged a unique bond with Trump’s administration which listens to Amman. It was an observer at the Astana talks on July 4-5, but appears to have been working the whole time on a separate ceasefire for the south with the US and Putin. For Jordan the situation in southern Syria is key to security. It wants the million Syrian refugees who have fled to return to their homes, only peace and ceasefires can achieve that. The Syrian rebels of the Southern Front also seem to be winners. They distrust Iran’s role at Astana, and Jordan is their lifeline for humanitarian aid and other supplies. Also Jordan and the US likely want to eradicate an ISIS pocket bordering the southern Golan. Airstrikes there last month killed two ISIS leaders.

The US is a winner if the ceasefire works because it shows US Secretary of State Rex Tillerson and Trump can accomplish something on the ground. Putin and Trump have a complex relationship because of accusations of Russian meddling in the US elections, any kind of official success they can have at achieving peace in Syria might change the conversation and show Trump’s Putin relationship to bare positive fruit.

For Israel this is a test of who guarantees the ceasefire and whether there is an opening to move Iran away from the Russia-Syria access. Weakening Iran’s role in Syria, and therefore Hezbollah’s role, would make Jerusalem less concerned. It could also cause Hezbollah to lash out to sink the ceasefire.

Turkey also is making noises about the Kurds in northern Syria which could cause a crises. The US and Russia have invested in this ceasefire, if it works it could prove Tillerson’s July 8 comment about “other areas where we can work together” prescient. That would mean the Syrian civil war is turning a new corner. But six years teaches us not to be so hopeful.