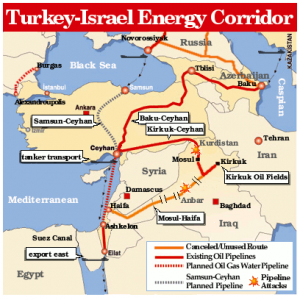 The two states enjoyed close relations in the 1990s, when a common world outlook led to a strong military bond, growing trade, and exchanges of people and culture. Writing in 1997, I characterized this bilateral relationship as having “the potential to alter the strategic map of the Middle East, to reshape American alliances there, and to reduce Israel’s regional isolation.”

The relationship flourished for another five years, until the Justice and Development Party (the AKP) won the Turkish elections in 2002 and proceeded to move Turkey in an Islamist direction. Among many implications, this meant distancing Ankara from Jerusalem and, instead, warming relations with Hamas in Gaza.

Under the leadership of Recep Tayyip Erdoğan, the Turkish government took one step after another to degrade Israelis and erode the relations between the two states, peaking with its indirect sponsorship of a 2010 Gaza-bound flotilla aiming to breach Israel’s naval blockade. In response, the Israelis did all they could to make things work again, apologizing and offering to pay compensation for the Turkish casualties on the ship Mavi Marmara that took part in the flotilla. Until now, they have been rebuffed.

Then, on Nov. 24, Erdoğan made the disastrous mistake of shooting down a Russian plane that had veered into Turkish airspace for 17 short seconds. This action came, it bears noting, against the backdrop of some 2,244 violations of Greek airspace by Turkish military aircraft in 2014.

The nearly unprovoked aggression raised the extreme ire of Russian President Vladimir Putin. What happened next reprised the schoolyard scene of a lesser bully foolishly annoying the greater bully. Erdoğan more than met his match in Putin, who showed himself a skilled risk-taker and willing to pay a heavy economic price to win his point.

A Wall Street Journal report of the Turkish-Israeli negotiations in Switzerland indicates that the Turks are ready to resolve the Mavi Marmara dispute, to end Hamas activities on Turkish soil, and (most importantly) to discuss the construction of a pipeline carrying natural gas from Israel to Turkey.

The last makes good sense from Ankara’s viewpoint, for Israeli gas would diminish its dependence on Russian gas. But this step hardly serves Israel’s interests. Once the Russian threat has passed, Turkish Islamists (who will likely be around for a long while) will resume their old ways, including the bitterly anti-Israel dimension. (Already, since negotiations began, Erdogan has met with Hamas political chief Khaled Mashaal.) Because a gas pipeline renders Israel hostage to Turkey into the long-range future, this looks like an imprudent step.

Despite an Israeli reputation for toughness, Jerusalem tends to be too optimistic (think of the Oslo Accords of 1993 or the Gaza withdrawal of 2005), creating major problems for Washington. However tempting an Israel-Turkey gas pipeline may appear, Americans should advise and work against such a step.

Prof. Daniel Pipes is an American historian, writer, and political commentator. He is the president of the Middle East Forum, and publisher of its Middle East Quarterly journal. His writing focuses on the American foreign policy and the Middle East.