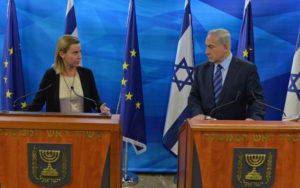 With one investigation after another by the European Union into Israel’s internal affairs, the inherent obsession the EU has is becoming more pronounced, deeming it clear it’s not really about the ‘occupation.’

If the European Union truly represents the people of Europe, then this continent is becoming a real menace to Israel.

EU hostility toward Israel is not new. Looking just at its appeasement policy toward Iran, a country that openly calls for the destruction of Israel, and the sympathy it shows to the Palestinians, who share Iran’s vision, is enough to raise suspicion that the EU is, at the very least, lightheaded in regard to this sinister agenda.

Federica Mogherini of the European Union and Javad Zarif of Iran in the Salle forum – Photo: US Dept of State

For decades, the EU was able to deceive the world into believing that its anti-Israel bias starts and ends with the “occupation.” End the occupation, it seems to be saying, and Israel will be treated fairly once again. But now, with its call for an investigation into the injury of Jafar Farah, Europe’s duplicity can no longer be maintained. Officially, the EU claims to have a special relationship with Israel. Officially, the EU is against the anti-Israel BDS movement and other forms of anti-Semitism, and it might even be sincere in this regard.

The big question, which has been ignored thus far, is what kind of Israel it supports.

Farah’s leg was broken during clashes with police in Haifa last Sunday. This isn’t the first time local police have injured Israelis, so why investigate now? Before answering this question, one need answer a set of other questions, such as:

– Who or what allows the EU to intervene in the internal affairs of another sovereign country?

– Why is the EU not similarly calling for an investigation into the 60 women and children killed in 2017 by Turkish border patrol?

– How about the 48 impending judicial inquiries into French police brutality?

– Or the 2,000 annual reports of police brutality in Germany?

– Or, perhaps, the well-documented brutality of Greece’s police?

– Likewise, why hasn’t the EU called for investigations into police behavior in Pakistan, Iran, Syria, etc., that by all accounts are immeasurably more violent than the Israel Police?

– Why, once again, of all the nations of the world, is it Israel that deserves the EU’s special attention?

The short answer to these questions is that Europe still holds a metaphysical gripe against the Jews, and is now turning against the Jewish state. Moved by guilt over the Holocaust, Europe was able to keep the lid on this fermenting mood for decades. But, the rise of the post-modern tyrannical culture of “Political Correctness,” which has engendered what Daniel Greenfield termed the “religion of racism,” enabled Europe to alter the biblical morality upon which it stood condemned, with racism being “the moral drama of damnation and redemption, confession and absolution.” In this framework, outlined so well by Greenfield, with its insistence on being a Jewish state, it is Israel that now stands condemned, not Europe.

It follows, then, that if Israel wishes to enjoy Europe’s full support, it must forsake this racist Jewish notion of being a “chosen people” and transform itself into a non-Jewish democratic state. Israelis should strive for an “Open Society” that by default opposes the tribalism or collectivism that characterizes Israeli society today. If Israelis can’t grasp this, if they continue to insist on living as the chosen people in their divinely-appointed land, then, for their own good, the EU must help Israel achieve this outcome by any means, including subversive activities, consistent condemnation of Israel in international forums and blatant intervention in Israel’s internal affairs.

This explains why the EU is now rushing to help poor Farah, who is the head of Mossawa Center, an NGO financed by, among others, the EU and George Soros’ notorious “Open Society Foundation.”

Though Farah presents himself as a human rights activist, Mossawa’s real goal is “to promote a democratic society, and acts against all forms of discrimination based on race, nationalism, religious affiliation.” To whitewash this clearly anti-Zionist agenda, Mossawa includes “gender and disabilities” in its human rights focus, things they are interested in like yesterday’s news.

It’s not the occupation, dummy, to use a popular phrase. Its the Jewish state itself that infuriates the European Union, even more so than all the atrocities committed in Syria, the occupation of Tibet, the North Korean gulags and the systematic human rights violations prevalent anywhere from South Africa to China to Venezuela to Myanmar. And it is this new moral order that enable the EU to justify its unforgivable metaphysical gripe against the Jews.