In a dramatic turnabout in Israel-EU relations, the European Union is asking Israel to immediately provide a substitute for the Russian natural gas now being sanctioned by the international community.

According to a new report in Israel Hayom, Israel and the European Union are conducting fast-track negotiations for the sale of Israeli natural gas to the EU, which would be piped to Europe via Egypt.

The two sides have already exchanged draft proposals and according to estimates, an agreement could be reached as early as this summer, following which the two sides will negotiate directly with the gas companies themselves. Continue Reading » 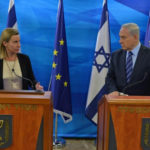 With one investigation after another by the European Union into Israel’s internal affairs, the inherent obsession the EU has is becoming more pronounced, deeming it clear it’s not really about the ‘occupation.’

If the European Union truly represents the people of Europe, then this continent is becoming a real menace to Israel.

EU hostility toward Israel is not new. Looking just at its appeasement policy toward Iran, a country that openly calls for the destruction of Israel, and the sympathy it shows to the Palestinians, who share Iran’s vision, is enough to raise suspicion that the EU is, at the very least, lightheaded in regard to this sinister agenda. Continue Reading »

Among the structures demolished were houses, storage spaces and several temporary structures, leaving some of the residents there homeless.  Continue Reading »

The European Union’s (EU) removal of Hamas from its terror blacklist sets a precedent for allowing anti-Semitism in Europe to run rampant, Morton Klein, National President of the Zionist Organization of America (ZOA), stated Wednesday.

“This both encourages and legitimizes Islamic terrorism and Islamic murder against Jews and others, and it sends a message to Islamic killers that Europe doesn’t care about what they do to Jews,” Klein stated in a special interview with Arutz Sheva.