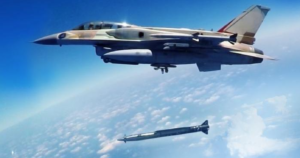 While Iran has been busy contending with the deadly coronavirus which has killed thousands, including senior military officials, Tehran has not forgotten it’s goal of regional hegemony and has therefore continued with it’s malign activities.

Though there may have been a momentary pause at the start, even a global pandemic has not changed the priorities for the regime, which is determined to grow it’s strategic backyard at all costs in order to threaten Israel.

Also busy with trying to curb the pandemic, Israel has not turned a blind eye to what’s going on in the neighborhood. Despite hundreds of soldiers who have refocused their research on the coronavirus, there are thousands of others who remain concentrated on keeping Israel one step ahead of her enemies.

The airstrikes on Iranian and Hezbollah targets south and southwest of the Syrian capital Damascus before dawn on Monday were the latest in a series of strikes credited to the Israeli Air Force in the past month and a half.

Israel’s war-between-wars campaign against Iran, which began close to a decade ago, has seen action on a weekly basis in recent years, with thousands of airstrikes taking out infrastructure and equipment belonging to Iran and it’s proxies, namely Hezbollah, in an attempt to prevent it from entrenching in Syria and obtaining game-changing precision weapons.

But according to a Western diplomat who visits Syria regularly, Iranian militias and Hezbollah fighters are doubling down in the Golan Heights despite being continuously attacked by Israel and plan to embed themselves as part of the Syrian Arab Army in the south of the country.

“Iranian militias will not exactly leave,” the diplomat was quoted by Foreign Policy as saying. “They will become a part of Assad’s army holding key positions. And then no one can object to their presence as outsiders.”

But that’s one of Israel’s redlines: All Iranians must leave Syria.

Israel has always been willing to take calculated risks when it comes to defending it’s security, and has recently taken this approach to warn Hezbollah fighters of incoming strikes in order to avoid deteriorating into a full-scale war with the guerilla-turned-terror army.

Such a warning was seen last week when a Jeep Cherokee carrying three Hezbollah operatives and bags of equipment was struck with a warning shot from a drone before being completely destroyed by another strike two minutes later.

But those were Hezbollah fighters, not Iranians. Israel has had no qualms about killing Iranians who continue to flow into the country unabated.

On Sunday, Bennett warned that Israel is not lowering its guard and is “more determined” than Iran, adding that he “wouldn’t say that it’s been good for [Iran, Hezbollah and Syria] recently.”

“For Iran, Syria is an adventure far from home, 1,000 km from home, from the Golan Heights. For us it’s life,” he said. “Iranian soldiers who come to Syria and operate within Syria: Their blood is on their hands. They are risking their lives and paying with their lives. We will not allow the establishment of an advanced Iranian base in Syria.”

It took only a few hours for that verbal warning to be followed by explosive action.