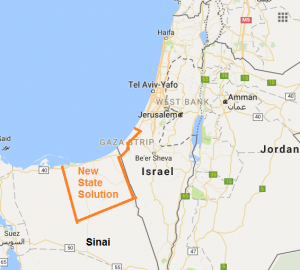 Op-ed: The New State Solution appears to merit serious consideration in resolving the Israeli-Palestinian conflict, after decades of failed attempts at the 2-state solution, that multiple int’l institutions and leaders have subscribed to, but failed terribly.
– It’s time that other ideas be allowed to enter the public discourse.

When President Obama leaves office, yet another US administration will depart without resolution of the Israeli – Palestinian conflict.

As with all incoming administrations, a Trump presidency ushers in the opportunity to review, retain, or revise the terms of long-standing policies, including those relating to the Middle East.

Both ideas have gained too much traction. Neither is understood by the vast majority of those by whom they are championed. The saving grace of these notions seems primarily to be their alliterative, easily retained titles.

A further state for the Palestinian Arabs can be established. That state must be viable though. It must augur in a future of promise, security, liberty, sovereignty, self determination and opportunity for its inhabitants. Citizens of this Palestinian state must be granted every possible chance to positively thrive. It must be a state whose people not only dare to dream, but who actually realize the dreams they conceive.

This state must not come into being at the expense of Israel either now or in the future. Neither Israel the people, nor Israel the country must be existentially compromised in order to facilitate its creation.

Any solution must be characterized by the reconciliation of practicability, possibility and imagination.With the above in mind, I introduce what I term THE NEW STATE SOLUTION.

The least practical aspect of the two-state scenario results from the geographical positioning of the Gaza Strip in relation to Judea and Samaria (West Bank).

Unlike in other proposals, The New State Solution would front-load this most intractable geographical challenge rather than defer it to a nebulous ‘future date.’

Israel and Egypt from space at night – Photo by NASA

The New State Solution would thus be anchored first and foremost in the Gaza Strip, with territorial expansion into a section of the Sinai Peninsula. This state could be larger than anything that could be accommodated by the minute area of Judea and Samaria, thus granting geographical viability. It also redefines the Gaza Strip as a central part of the solution, rather than an insurmountable problem.

ON THE ARAB STATES

The boundaries of the New State would be brokered and ratified by several other parties beside Israel; most notably Egypt. Egypt is a prime mover within the Arab world. Having their imprimatur would grant legitimacy among several Arab nations and non-western nations. Egypt also has a history of going alone in the Arab world where necessary, so long as its own best interests are assured.

The New State would enjoy clearly defined, secured borders. Good fences make good neighbors. To the south, Egypt would positively amend the current arrangements it has with the Gaza strip in line with the contours of The New State and the opportunities that spring forth. To the north, Israel would extend its arm even further and open its hand even wider to partner with its new, peace-seeking neighbor.

The New State would have cultural affinity with its Egyptian neighbors and there is far closer cultural familiarity between Israelis and Palestinian Arabs than many fully appreciate. That affinity could be built upon and expanded, creating triangulated, regional cooperation.

ON DOMESTIC SECURITY AND DEMILITARIZATION

There would be no IDF presence within the borders of the New State. None. Independent states do not want foreign troops within their land. The New State would thus be both demilitarized and have a highly effective security apparatus. Contrary to the perception of many, demilitarization does not mean no weapons. Nor does it mean no security. It means no military. For example, The New State would have APC’s but not tanks. It would have light air ordinance such as helicopters but no fighter jets. It would have speed boats and patrol boats, but no battleships or submarines. It would have a police force but not an army. The security and police forces of the state would maintain superior fire power and logistical capabilities. These are the same tools by which democratic states maintain daily, domestic security after all.

ON PREVENTING ENDOGENOUS SPILLOVER AND INFILTRATION

Any Palestinian Arab state established in Judea and Samaria requires that both Israel and Jordan stand fast as military guarantors. No state in the region enjoys absolute, total security but Israel is a comparative super power in the Middle East. The long term security of Jordan is far more precarious. The establishment of a Palestinian Arab state in Judea and Samaria means that in the event of a collapsing or collapsed Jordan, an unimpeded corridor of potentially pernicious states would be established to Israel’s east, extending from Afghanistan and Pakistan, into Iran, through Iraq, via Jordan, across Judea and Samaria, and onto what would be the divided city of Jerusalem in the two state formula.

Israel would stand alone as the final bulwark against such threats. Advocates of the two state solution must not shut their eyes to this very stark possibility.

The New State Solution offers far more reasoned security guarantees. To the south, south-west and south-east of the New State, the Egyptian military would be present only on the Egyptian side of the shared border. Israel would maintain its security presence on the border with the New State on the Israeli side only.

Israeli and Egyptian forces manning the borders would not only offer reassurance to their own countries, but also to the New State. Both would closely assist and cooperate so as to prevent spillover beyond, and unwanted infiltration within, the borders of The New State.

A state established in Judea and Samaria will be close to landlocked with very few natural resources. That may beget a culture of tremendous entrepreneurialism among its citizens, but it may not. It may beget despair. Nobody can be certain. A failing economy will yield only a failed or client state and will be a manifestation of a problem unresolved.

With a shoreline no less inviting than that of Tel-Aviv, The New State would boast rich opportunity for trade, commerce, tourism, hotels, resorts, casinos (on or off-shore), import, export and both an open, commercial air-port and an open commercial sea-port. Both would be toward the western most section of the country. Favorable security coordination would be agreed between Israel, Egypt and The New State.Massive economic investment within The New State would come from all international parties who have pledged their commitment to resolving the conflict. Actors would include the United States, the E.U., Great Britain and both Israel and Egypt; at a minimum.

Financial and commercial assistance would be granted to any residents of Judea and Samaria wishing to relocate to The New State.

Consider that today, as in the past, Jews immigrate to Israel with the belief that a better life awaits them here. Their reasons for doing so are varied. Significantly, however, Jews come to Israel voluntarily. They are neither forcibly transferred into Israel as individuals, nor as whole communities.

So too should it be for the Palestinian Arabs of Judea and Samaria.

Like many in the Jewish Diaspora, some will wish to remain where they currently reside. Others will sense and seize upon the gleaming opportunity offered by The New State.

The Palestinian Arabs are no more monolithic than are the Jewish People. Some may wish to constitute their futures in Judea and Samaria, others will prefer the option of opening a hotel along the shores of their own state or the prospect of building a home overlooking the Mediterranean, or they will move seeking employment and the opportunity to build up a state in which they have agency. They ought to be allowed to choose.

Successful repatriation to The New State would significantly further reduce Israel’s demographic considerations regarding Judea and Samaria while those residents already in the Gaza Strip would be part of The New State, resolving that demographic concern.

For those not wishing to relocate from Judea and Samaria, the more favorable demographic realities enjoyed by Israel would engender the confidence needed to annex Judea and Samaria with full and equal rights being extended to all, regardless of race, religion or creed. This would take place only once a 50% immigration threshold to The New State is achieved.

Israel would continue the policy of the right of return and would control immigration policy within Israel. It would thus maintain its democratic and Jewish character by far more than the two-thirds majority advocated by some proponents of the one state solution.

ON GOVERNANCE AND GOVERNMENT

Any future massive attack launched against the State of Israel from the Gaza Strip should serve as a prelude for the total and final toppling and dismantling of Hamas and their oppressive regime. The destruction of Hamas should be undertaken with the aim of facilitating and incubating the legitimate emergence of a new, pragmatic, though not necessarily westernized, government that will administer a free, viable, secure, burgeoning New State that is secured, supported and championed by Israel, Egypt and the international community.

The first footstep into Gaza by IDF soldiers as part of the next defensive operation in response to rocket or tunnel attacks should set in motion The New State Solution as strategy. The diplomatic groundwork should begin immediately however, in advance of any unwanted, but likely, future conflict.

THE CASE FOR THE NEW STATE SOLUTION

“The United States is deeply committed to securing Israel’s future as a Jewish and Democratic state. We are also committed to an independent, viable Palestinian state, where Palestinians live with freedom and dignity. The only way to achieve that is through a negotiated solution that creates two states for two peoples living side by side in peace and security.” The New State Solution adheres precisely to Kerry’s own spoken definition of the sole way forward, though not to his vision.

It offers a negotiated solution resulting in two states for two peoples living side by side in peace and security. The definition endures therefore. It is the vision that must change.

For too long, calls have come for a two state solution incorporating Judea and Samaria as the basis of a Palestinian state. At its core, such a plan requires the mass, likely enforced displacement of at least many tens of thousands of Jewish people in order to build a home for another people. Past experience within Israel does not bode well for any such notion, nor should it. I do not want to see the people of Israel go through such a process. I do not wish to see the Palestinian Arabs go through such a process. There should be no forced transfers of populations.

Politicians and communal figureheads frequently declare that the two-state solution is the ‘only solution.’ This tone of finality is both inaccurate and unhelpful. It places far too much faith in a plan that is demonstrably flawed and it blunts legitimate discussion and debate about alternatives.There are alternative solutions to every problem – including to this problem. I am presenting my plan as one such alternative. It can be refined; but it is an alternative.

When assessing opportunities for peace, it is my hope that President-elect Trump brings with him a new attitude, where Presidents turn their gaze away from Israel’s east, and affix it instead upon Israel’s west when reviewing the peace process.

He, Israel’s Prime Minister and the President of Egypt could yet realize a new, fresh and viable vision by so doing.

I hear Mr. Trump has an eye for the development of gleaming, shining and bold new projects. This would be the boldest of all.

The opinions expressed in this article are the author’s own and do not reflect the view of Ynetnews or any of its affiliate publications.