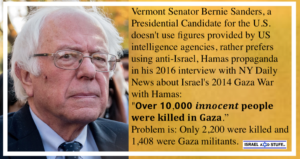 Democratic presidential candidate Bernie Sanders is standing by his criticism of Prime Minister Benjamin Netanyahu, saying the US goal in the Middle East must be to try to bring people together and “not just support one country, which is now run by a right-wing, dare I say, racist government.”

Sanders, who is Jewish, said Monday at a CNN town hall in New Hampshire that he believes the United States should “deal with the Middle East on a level-playing-field basis,” and not express support for just one country.

The senator from Vermont says he is “not anti-Israel” – nor does he oppose sending military aid to the Jewish State – but feels Netanyahu’s policies don’t help to advance peace.

“As a young man I spent a number of months in Israel, worked on a Kibbutz for while, I have family in Israel, I am not anti-Israel but the fact of the matter is that Netanyahu is a right-wing politician who I think is treating the Palestinian people extremely unfairly,” Sanders said as the audience erupted in applause and cheers.

Sanders then added that he is “100% pro-Israel” and that the country has “every right in the world to exist and to exist in peace and security and not be subjected to terrorists’ attacks.”