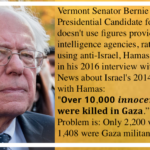 Democratic presidential candidate Bernie Sanders is standing by his criticism of Prime Minister Benjamin Netanyahu, saying the US goal in the Middle East must be to try to bring people together and “not just support one country, which is now run by a right-wing, dare I say, racist government.” Continue Reading »

Leftist Haaretz journalist Amira Hass left offended after being forcefully expelled for being Jewish and attending a pro-Palestinian conference at Juderein Birzeit University.

By Nir Har-Zahav and Tova Dvorin

A Haaretz reporter was ejected from a pro-Palestinian conference at Birzeit University on Saturday, reporter Amira Hass said – simply for being an Israeli Jew.

Hass attempted to attend the “Alternatives to Neo-Liberal Development in the Occupied Palestinian Territories – Critical Perspectives” conference at the university, which is located near Ramallah where she lives.

But she was ejected from the hall by the organizers, Hass claimed, after students at the admission desk noted she worked for the Israeli publication and alerted security authorities to intervene. Continue Reading »