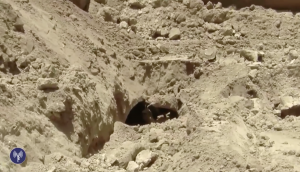 Incidents like this are not uncommon. Since Operation Protective Edge, the 2014 conflict between Israel and Hamas, scores of Palestinians are reported to have died as a result of tunnels collapsing across the Gaza Strip.

This coming summer will mark three years since that operation, which was mostly characterized by a significant and largely successful IDF mission to put a halt to the vast network of underground terror tunnels Hamas built with the purpose of infiltrating Israeli territory and carrying out terror attacks against security forces and civilians.

In the time that has lapsed since 2014’s conflict, Israel has invested more than NIS 600 million in detection technology and trained every ground soldier to handle an attack launched from underground,  planning to eliminate the terror tunnel threat once and for all.

However, a report released by the State Comptroller in February found that while Israel was overwhelmingly unprepared to face the tunnel threat prior to Protective Edge, it does not seem that the country has managed to make sufficient progress since then.