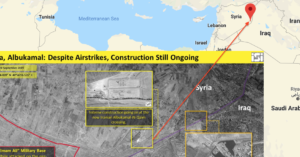 Syrian air defenses responded to an alleged airstrike on the Iraq-Syrian border town of Albukamal just after midnight on Saturday. It is the latest of several airstrikes reported in the same vicinity that are alleged to have struck Iranian-backed groups or bases linked to Iran. Albukamal is a key strategic crossing between Iraq and Syria and could be conduit for weapons trafficking from Iranian-backed groups to Hezbollah or the Islamic Revolutionary Guard Corps in Syria.

Albukamal, a key strategic crossing between Iraq & Syria and will be conduit for weapons trafficking from Iranian-backed groups to Hezbollah. – Photo: IMAGESAT INTERNATIONAL (ISI)

The raids were first reported by Arabic media, particularly Russia’s Sputnik in Arabic. The report claimed that local sources had said missiles were fired at Albukamal and air defense responded, hitting some of them. Albukamal has been increasing in the spotlight after reports that the border crossing would re-open in August. Those reports were premature and the opening appeared delayed until early September. Now the crossing is supposed to open on Monday. Oddly, the latest reports of the crossing opening came just four hours after the reports of the airstrikes, as if to show that despite the strikes the crossing will open.

The overall picture at Albukamal is that the crossing is proceeding despite the strikes. It also is unclear what the strikes have accomplished. Regardless of the mystery about who has carried out airstrikes, and demands by Iraqi-based Iranian-backed paramilitaries that the area needs better air defense, the equation isn’t changing. Last summer an airstrike hit a headquarters of Kata’ib Hezbollah. This group is linked to the Iraqi Popular Mobilization Units (PMU) which are mostly Shi’ite militias who have been incorporated into the Iraqi Security Forces. These forces were supposed to be fighting ISIS, but when the ISIS war mostly ended in 2017 some of them began to go to Syria to support the Syrian regime in Damascus. They are now thought to form a “land bridge” or “road to the sea” for Iran and its regional ambitions.

Israel has said it opposes Iran’s presence in Syria. Yet Iran has increased that presence and transfers of precision missile technology to Hezbollah are alleged. In late August Israel struck an Iranian IRGC “killer drone” team near the Golan. On September 9, Shi’ite militias were alleged to have tried to launch a missile from Syria toward Israel. It failed. In August 2018 Iranian ballistic missiles were reportedly transferred to Iraq. Rockets and mortars have been fired near US bases and there are increased threats to the US in Iraq. Overall the picture is of increased Iranian presence in Syria and Iraq. Overall the picture is also of increased mysterious airstrikes against Iranian supported groups. A half-dozen of these airstrikes have reportedly hit PMU munitions warehouses in Iraq, leading the group to say it wants its own air force.

When the Al-Qaim border crossing with Albukamal finally opens it will be a major symbol and it will also likely lead to increased attention about what is crossing there. But it will also mean that more civilians will be intermixed with any military equipment that might be rolling across. If that happens airstrikes could become more difficult. So far they’ve generally targeted areas outside the town, with few photos emerging to verify that the strikes took place, except the satellite photos. Casualties among the militias or alleged Iranian presence have been low. And the airstrikes usually take place at night when people are sleeping.