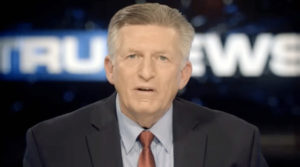 Rick Wiles also said during a broadcast Friday on his TruNews YouTube channel that the Jews also will “kill millions of Christians.” His fundamentalist Christian platform regularly releases anti-Semitic, Islamophobic and homophobic videos.

Unreal antisemitism from Rick Wiles at” TruNews”as he calls the Trump impeachment process a “Jew Coup” and says Jews will take over the country and “kill millions of Christians.” pic.twitter.com/Ib29EmGCxW

Representatives of TruNews have attended White House news conferences and have been called on to ask Trump questions.

“That’s the way the Jews work, they are deceivers, they plot, they lie, they do whatever they have to do to accomplish their political agenda,” Wiles said on what he calls the “Godcast.”

“This is a coup led by Jews to overthrow the constitutionally elected president of the United States and it’s beyond removing Donald Trump, it’s removing you and me. That’s what’s at the heart of it. … I am going to tell you, Church of Jesus Christ, you’re next. Get it through your head! They’re coming for you. There will be a purge. That’s the next thing that happens when Jews take over a country, they kill millions of Christians.”

Forget for a moment the hate and evil being spewed by this hate-monger. His claim is not just wrong, it’s ludicrous. No American president in the last 50 years has been more consistently pro-Israel and a patron for Jewish causes than Donald Trump. His support for helping Jewish institutions in New York began decades before he became President.

Israel has even named a new town after him.

It’s bad enough the Democrats spew like-minded hate to turn Jews away from supporting Donald Trump, but it’s an abomination for a Christian Pastor to spread such lies, in G-d’s name.