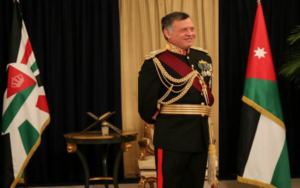 – Saudi FM, “It will be possible to renew negotiations despite the current crisis…”
– King Abdullah II of Jordan, “Renewing the negotiations is dependent on goodwill expressed by both parties.”

Arab leaders in Davos expressed optimism Wednesday about the possibility of renewing Israeli-Palestinian peace negotiations, despite controversy over the recent US decision to recognize Jerusalem as the capital of Israel.

King Abdullah II of Jordan told Maariv during the Davos conference that, following US President Donald Trump’s announcement and intention to move the US embassy to Jerusalem, he would rather see the glass half full and focus on relations with Israel and how these ties can promote peace.

The king said that “renewing the negotiations is dependent on goodwill expressed by both parties.” He also added that he would “prefer to remain optimistic.”

Saudi Minister of Foreign Affairs Adel bin Ahmed Al-Jubeir told Maariv that “[we] must wait for the American initiative,” and that “if it will have components that both parties can accept, it will be possible to renew negotiations despite the current crisis surrounding the Trump statement.”

On Wednesday afternoon Netanyahu is scheduled to meet German Chancellor Angela Merkel and in the evening will hold a meeting with French President Emanuel Macron.

Another meeting is scheduled with the President of Rwanda Paul Kagame. Their meeting is likely to deal with Israel’s intention to deport illegal migrant workers to Rwanda and the controversy surrounding the issue.