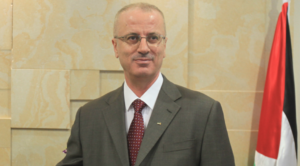 Seven were lightly wounded in the blast—all of whom were security guards of the convoy. Israel offered to give medical care to the wounded at the Erez Crossing.

Two vehicles were badly damaged and could not continue while at least four others were damaged, with windows or sunroofs blown out. One had signs of blood on the door. Footage published by Al Jazeera showed a massive smoke cloud billowing from the site of the explosion.Immediately after the incident took place, senior Palestinian Authority officials contacted the Coordinator of Government Activities in the Territories, Maj. Gen. Yoav Mordechai, to coordinate the prime minister’s exit from the Strip.

Hamdallah arrived in the Gaza Strip for the first time in five months due to the difficulties in the reconciliation talks between Fatah and Hamas.

Minutes after the blast, Hamdallah, appearing unhurt, delivered a speech at an inauguration of a new sewage purification facility in the northern Gaza Strip, stressing the attack “will not deter (us—ed) from seeking to end the bitter split” and that Fatah will continue coming to the Strip to try to end divisions with Hamas.

He then immediately left without sticking around for the ribbon-cutting ceremony.

“It was a well planned attempt. They planted explosive devices two metres deep,” Hamdallah said later in the West Bank city of Ramallah, where he is based, without pointing a finger at any group.

The Palestinian premier entered the Strip to attend the inauguration of the sewage purification plant, which was envisioned in 2007 after overburdened sewage reservoirs collapsed, killing five villagers.

The World Bank, European Union and other European governments have paid nearly $75 million in funding for the plant. Hamas’ takeover of Gaza from the Palestinian Authority in 2007 and the ensuing Israeli-Egyptian blockade, power shortages and conflicts delayed the opening of the project for four years.

The explosion took place on Salah a-Din Street, a main road in Beit Hanoun in the northern the Gaza Strip.

Witnesses said the bomb was planted under an electric pole on Gaza’s main north-south road and went off shortly after Hamdallah’s 20-vehicle convoy had entered through the Israeli-controlled crossing.

“I could not see anything because smoke and dust filled the air. When the smoke cleared, the explosion was followed by heavy gunfire, apparently from police securing the convoy. When the dust cleared, I saw people running everywhere, and police were running around,” said a witness who declined to be identified because of security concerns.

“The bomb exploded when the last car in the convoy passed. It was a security vehicle,” a source told Ynet. “As soon as that happened, the security guards fired gunshots in the air, and Hamdallah’s car didn’t stop but instead drove quickly away from the place—according to procedures.”

The official Palestinian channel reported that Hamdallah and Faraj were saved from an assassination attempt.

Fatah was also quick to call it an assassination attempt, blaming the attack on Gaza militants.

The office of Palestinian President Mahmoud Abbas said he holds Hamas responsible for the “cowardly attack” which was perpetrated against “the unity of the Palestinian people.”

Hamas officially announced that several suspects had been arrested and that its men had launched an “urgent” investigation to locate the perpetrators of the attack, which it called a “crime” and an attempt “to undermine security in the Gaza Strip and hurt efforts to achieve unity and reconciliation” with Fatah.

Hamas went on to reject the accusations of President Abbas, adding it had no hand in the incident.

Hamas has been the undisputed leader of the Gaza Strip since it effectively ousted the Palestinian Authority in 2007. The Authority, internationally recognized and supposed to prefigure an independent Palestinian state, now governs only fragments of the West Bank, separated from the Gaza Strip by Israeli territory.

After years of devastating dissent, Hamas agreed on October 12 in Cairo to surrender powers to the Authority. This agreement had given rise to cautious hope that the situation in the Israeli and Egyptian blockaded territory would improve, and to clear up a particularly gloomy political horizon for the Palestinian cause.

Despite the importance of the stakes, however, Hamas and the Authority have yet again been unable to overcome their divisions, and the October 12 agreement remained largely unfulfilled.