Arab Muslims Rewriting the Bible: Jesus was the first Palestinian

Both Palestinian leaders & Islamic religious clerics alike continue to preach that Jesus was one of their own, and their lie has caught on.

As has become custom, Palestinian Authority last week made a show of claiming Jesus as one of their own in the run-up to Christmas. 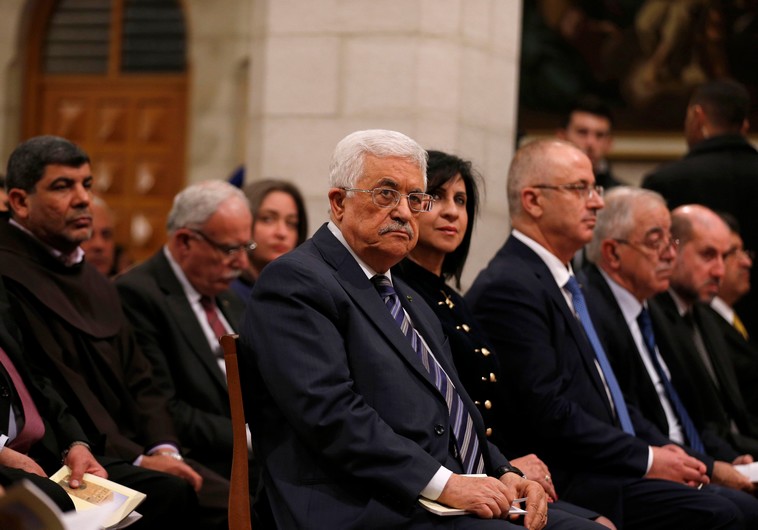 Palestinian Authority President Mahmoud Abbas attends a Christmas Midnight Mass at the Church of the Nativity in the West Bank town of Bethlehem December 25. – Photo: REUTERS – Considering what’s happened to the Christian population in Bethlehem since the formation of the Palestinian Authority, isn’t this like Hitler going to a Bar-Mitzvah?

Here are some of the more egregious examples (translations provided by Palestinian Media Watch):

We celebrate the birth of Jesus, a Palestinian messenger of love,justice and peace. – Palestinian leader Mahmoud Abbas, as quoted by the Wafa news agency on December 22.

Christmas is also a Palestinian holiday, because Jesus, peace be upon him, was Palestinian. He was born in Palestine; lived and was sent [as prophet] to Palestine. Therefore, Christmas has a special Palestinian flavor. – Mahmoud Al-Habbash, the PA’s Supreme Sharia Judge, Al-Hayat Al-Jadida, December 22, 2014.

We are standing here, Muslims and Christians, in Yasser Arafat Square, [named after] the symbol of our cause, to celebrate Christmas. So too we will stand united to celebrate victory, far off as it may be. Merry Christmas, let’s celebrate and be merry; Jesus the Messiah is Palestinian, and we are Palestinians and will continue to hold our heads high. – Ramallah Governor Laila Ghannam, Palestinian Authority TV, December 7, 2014.

Saeb Erekat, the chief PA peace negotiator who has become notorious for his outlandish historical revisions, stated during the Christmas tree lighting in his hometown of Jericho that Jesus is “the first Martyr, the first Palestinian.”

Sadly, it is not only extremists and fringe elements that are promoting this historical fallacy, but the very leaders whose example most Palestinians look to and follow. As such, the belief that Jesus was a Palestinian, just like the belief that the Jews have no history in this region, has become accepted truth among many local Arabs.