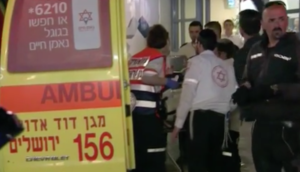 A security guard was stabbed multiple times in the upper body and was left in critical condition even after the quick response of a police officer who immediately shot dead the Palestinian terrorist, thus preventing even more injuries.

A security guard was severely wounded in a stabbing attack in the Muslim Quarter of the Old City of Jerusalem on Sunday.

The attacker was shot and allegedly killed. Israel’s Shin Bet Security Agency said that the attacker was from the West Bank, although earlier reports from Israel’s Channel 10 television stated that Turkish identity papers were found on the body of the alleged assailant.

Israel’s Magen David Adom ambulance service said one person was stabbed in the upper body and was in critical condition. The victim has been evacuated to Shaare Zedek hospital for treatment. An Israeli police spokesman confirmed the attack, near the Western Wall, and said the assailant was “neutralized” but gave no further details.

Public Security Minister Gilad Erdan said following the attack, “I praise the police officer who quickly responded, killed the attacker and prevented more injuries. The Israel Police will keep acting against the bloody terrorists, who are incited by the Palestinian Authority – in Israel, and throughout the country,” he said.

Jerusalem Mayor Nir Barkat also praised the police’s quick response, and said: “The enemies of Israel are constantly trying to harm soldiers, policemen, security guards and citizens, and that is because of the severe incitement that they are subjected to by the Palestinian Authority.

“The only answer to it is an uncompromising struggle against terrorism, and at the same time, to develop and build a united Jerusalem,” he said. “I am asking from all the citizens to keep maintain their daily routines, be aware of their surroundings and be in touch with security forces if needed, in order to prevent more terrorists’ activities,” he continued.

Tensions have risen in Jerusalem since U.S. President Donald Trump recognized the city as Israel’s capital on Dec. 6.

The latest incident followed an attack on Friday in the West Bank in which a Palestinian motorist rammed and killed two Israeli soldiers guarding a road near a Jewish settlement.

Anna Ahronheim and Reuters contributed to this report.