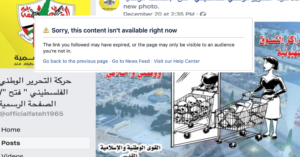 The campaign also hopes to reveal what it calls a policy of double standards by Facebook management in dealing with Israeli and Palestinian incitement on its site.

“Twitter is the first in a series of actions we will take,” says Eyad Rifai, head of Sada Social Center.

“Next week, we will meet with a group of institutions and potential partners to discuss ways to counter the attack on Palestinian content.”

He warned action in the field will be taken at a later stage as well.

Rifai said the campaign aims to “protect the digital rights of the Palestinian people so they can practice their right of absolute freedom of speech via cyberspace without the involvement of Facebook management that “limits their freedoms while allowing Israeli users to incite against Arabs as well as call to kill them.”

He added: “Facebook has developed an algorithm that automatically deletes users’ posts and accounts if they include names of Palestinian political parties, for example ‘Hamas,’ ‘Jihad,’ ‘Popular Front,’ ‘Qassam,’ ‘Saraya’ and ‘Islamic Jihad,’ or names of martyrs, leaders and others without looking at the context in which they were posted, which sets a historic precedent for infringement on media freedom.”

Rifai pointed out that Palestinian journalists and media people are unable to carry out their work work as a result of “Facebook’s unfair policy, which doesn’t pay attention to professional work standards. This puts the Palestinian narrative on Facebook in real danger.”

He said the campaign had sent a letter to the Middle East management of Facebook to condemn the policy, adding that he “isn’t very optimistic” about receiving a positive response.

“We will receive the same justification, which isn’t new anymore, that Facebook is an American company committed to renouncing terrorism as part of an agreement with the American government.

He insists he was not trying to provoke anyone.

“I was just doing my job when I lost my account,” he explained.

“Even when we cover news regarding Lebanon, we can’t use terms concerning Hezbollah or its leader Hassan Nasrallah,” he continued claiming he cannot object to or report accounts being deleted.

“When we try, we receive a message that an unknown error has occurred, which creates another issue.” he said.

Abu Dalfeh said Facebook management “does not handle the escalating Israeli incitement against Palestinians the same way or use similar algorithms, which makes it biased toward Israel.”

In August, the Sada Center documented more than 17 violations against Palestinian content on social media, most of them on Facebook, “which created a need for the center and other activists to protest against Facebook managerial procedures rather than just continue to monitor its violations.”

Ali Bikhat, a Palestinian social media analyst and head of the Social Media Club at The Palestinian Institute for Communication and Development, claimed that “there has been coordination between Israeli authorities and the management of Facebook.

On the Palestinian side, there isn’t any diplomatic effort to reach agreement with site management to reduce its policy or end it.”

For this reason, he advocates for a more proactive approach.

The goal of the campaign should be “ending Facebook’s policy against Palestinians accounts,” he added.

“Facebook policy eliminates the Palestinian existence and narrative on its site, which supports and serves the Israeli narrative,” he insisted. “Even if the campaign doesn’t end the policy, at least it highlights the case widely and raises awareness.”