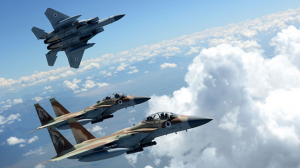 Mainstream media is neglecting how Arabs are turning to social media, acknowledging a common foe in Iran & Hezbollah, and how it’s bringing Israel and much of the Arab world together.

While Syria, Iran and Russia are busy threatening Israel over its alleged strike on an Iranian air base in central Syria, much of the Arab world is encouraging the Jewish State to keep up the pressure.

Most of the Arab world views Iran as a major threat, just as Israel does. The Islamic Republic seeks regional hegemony, and its military foothold in Syria is cause for serious concern.

Photos of destroyed buildings after alleged IAF strike in Syria

So, when Israeli aircraft (according to both Russia and the US) destroyed the Iranian-held T-4 air base on Monday, it elicited a flood of supportive remarks on Arabic-language social media.

The situation will seem completely topsy-turvy to anyone who has lived through the decades of Israeli-Arab conflict. But, there you have it. A common foe appears to be brining the Israelis and Arabs together.

“We must tell the truth, Israel is the only state that punishes Assad for the massacres he carries out,” Khadr Abu al-Heij, a Palestinian living in Sweden, wrote on Al-Jazeera’s popular comments portal.

“This is a shameful embarrassment for the Arab states. While Arab leaders just talk and say how horrible the massacre in Syria is, Israel keeps quiet and acts. Arabs, Syrians, Lebanese – who is the real enemy of the Arabs? Israel, or Iran that conquered Syria unopposed?” he wrote.

Egyptian Ismail bin Ismail also called on Israel to continue striking Syria, writing, “It turns out Israel not only has courage but also the brains to inflict losses on Iran in Syria. If there is one state that puts Iran in its place, it is Israel. It is no wonder that Damascus hides behind Russia and Iran. Assad is afraid of [Prime Minister Benjamin] Netanyahu and [Defense Minister Avigdor] Liberman.”

Lebanese Bassel al-Hassan wrote that Israel must continue its strikes in Syria, even at the cost of violating Lebanese airspace.

“Media reports say that the Israeli planes attacked from Lebanese territory, so why is Hezbollah quiet? Hezbollah works hand in hand with the Shiites in Iran and betrays its Arab brothers in Syria. Iran and Syria, with the assistance of Hezbollah and Shiite militias, conquered Syria by massacring the Sunni population and we, the Arabs, keep quiet,” he wrote on Facebook.

“Thankfully, Israel is there to avenge the blood of our brothers. Luckily for the Arabs, Israel is unwilling to accept Iranian control in Syria. If it wasn’t in Israel’s interest, no Arab country would have stopped Iran. Where are the Arab leaders? They abandoned their people, just as they abandoned the Palestinians.”