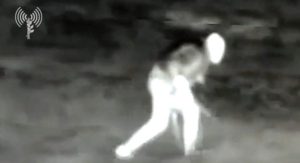 His (unfulfilled) objective: to murder Israeli families living less than a mile away.

We stopped him before he could. pic.twitter.com/gQvXqVgfwm

According to the IDF, despite the incident there have been no changes in the guidelines issued to the residents of Israeli communities bordering the Hamas-controlled enclave.

“The explosion which was heard a few minutes ago is due to the IDF activity on the border,” said the Eshkol Regional Council officials in a statement.

“The event is under military control, it should not impact the communities.”

Over the weekend, Palestinians in Gaza have resumed the March of Return demonstrations near the border fence after a three-week hiatus.

Some 2,200 people protested at several locations along the border, with some demonstrators burning tires, hurling stones and explosives at the security fence.

In one instance, a Molotov cocktail was thrown at a military vehicle. No IDF soldiers were hurt in the incident.