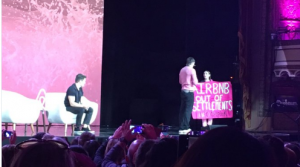 The protestor, Ariel Gold, brandished a pink sign reading “Airbnb out of Settlements; @codepink,” the Twitter handle of “a women-led grassroots organization working to end U.S. wars and militarism (and) support peace and human rights initiatives,” according to their website. Gold describes herself on Twitter as a “Hip mama” first and also as a staff member of CODEPINK, an “anti-Zionist Jew,” and a BDS supporter, amongst other titles.

Onstage at the time were both Kutcher and Airbnb founder Brian Chesky. The former took time to address Gold’s apparent opposition to the home-sharing website permitting usage of their service in the West Bank. The 38-year-old husband to actress Mila Kunis greeted the protestor graciously, shaking her hand and exchanging warm smiles, and he then led her off the stage. Gold later tweeted, “I took to the stage to say Palestinian human rights should mean more than entrepreneurship. #AirbnbOpen #StolenHomes.”

Addressing the cheering audience in footage captured and shared via a Twitter user in the crowd, Kutcher described his hopes for a more pleasant world that “doesn’t have borders; that doesn’t discriminate against one another. We can get to know each other intimately and understand our collective narrative is a narrative for everyone, and that we all can belong in a world together without borders,” words which were received with rapturous applause.

The investor than referred back Airbnb’s founder, who had not left the stage: “I know this man,” he said. “I know his heart, I know his initiative, and I know that when a problem gets brought to his desk that says that there is a discrimination or this is a displacement, that he cares. And that the first thing that he does is try to look at the system holistically and change it to make it better.”You’re welcome to a world where we all belong. And if you want to sit down and have a conversation about it, I’m happy to have that conversation with you.”

In January of this year, Airbnb came under criticism from Palestinians for permitting properties located in West Bank settlements on their website.

Then live by example by ending your support of BDS
who seeks Israel’s demise
and Hamas
who sends suicide bombers, knife-yielding terrorists https://t.co/WaIa8rKy7v