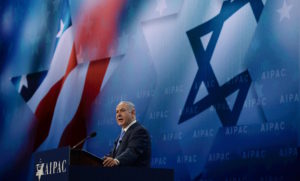 The event was attended by reporters from the New York Times, the Washington Post and other local broadcast networks. Netanyahu refused to answer questions about Israeli politics and about his former adviser Nir Hefetz becoming a state witness.

The prime minister was asked by the reporters whether he believed in a two-state solution in order to bring an end to the conflict between Israel and the Palestinian Arabs and replied, “I haven’t named it. But I’ve defined it.”

“There is no ability by the Palestinians to deal with these things. Who does the job is the Israeli security forces,” Netanyahu said. “You can say it will be good if we give them a state … empirically it doesn’t work with what we see.”

At his speech at the AIPAC Policy Conference a day earlier, Netanyahu said the Palestinian Authority’s (PA) leadership must end its policy of funding jailed terrorists and make a serious commitment to peace for a final status agreement to be achieved.

“I have a message for President Abbas: Stop paying terrorists. Because what message does this send to Palestinian children? It says murder Jews and get rich. And I believe President Abbas should find better use for this money—to build roads, schools, hospitals, factories. Build life, don’t pay death. Invest in life. Invest in peace,” said the prime minister.