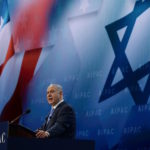 The event was attended by reporters from the New York Times, the Washington Post and other local broadcast networks. Netanyahu refused to answer questions about Israeli politics and about his former adviser Nir Hefetz becoming a state witness. Continue Reading » 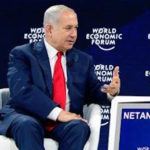 With the majority of both Israelis and Arabs rejecting the ‘2-state solution,’  PM Netanyahu suggested to the World Economic Forum in Davos a ‘new model’ for peace with the Palestinians, with Israel maintaining security control of the region, but allowing the Arabs to govern themselves.
– Netanyahu asserted: ‘There’s no substitute for the US’ as mediator.’

By The Associated Press, Reuters

Israel’s prime minister is suggesting a “new model” for peace with the Palestinians that would allow them to govern themselves but maintain Israeli control over security.

Speaking at a discussion at the World Economic Forum in Davos, Switzerland, on Thursday, Benjamin Netanyahu declined to endorse a “two-state solution” favored by the Palestinians and most of the international community. Continue Reading »

Prime Minister Binyamin Netanyahu will meet tomorrow (Wednesday) for the first time with Donald Trump in his capacity of President of the United States.

Channel 2 reported that according to estimates, Netanyahu will refrain from mentioning the words “Palestinian state” and explain to the president the lack of feasibility in setting up such a state.

It is believed that Netanyahu will tell the president that he is willing to negotiate with the Palestinians but there is no practical feasibility to establish a state. Continue Reading »

With Abbas the least popular in the West Bank, Hamas’ no-State Solution wins

Since Abbas’ party is deeply fragmented and his leadership undermined with most Fatah members in Gaza defecting to Hamas and the majority of West Bank Palestinians wanting him out of office, there is no functional gov’t to lead an independent Palestinian state regardless of the antisemitic support given by the US (Obama’s gov’t), the UN and the EU.

During a celebration in Ramallah marking the 52nd anniversary of the founding of his Fatah faction, Palestinian Authority (PA) President Mahmoud Abbas declared that 2017 will be the “year of international recognition of the State of Palestine.” Continue Reading »

Every MK who spoke at the Yedioth Ahronoth conference claimed that there’s no connection between political stagnation and Israeli policy, and the boycott against Israel. Continue Reading »

Obama Sends Netanyahu a Message: ’50 Years of Occupation Must End’ In unusually tough language that underscores the fracture in relations between Washington and Israel, AFP reported, White House Chief of Staff Denis McDonough said “an occupation that has lasted for almost 50 years must end.”

Israel’s Defense Minister: The Palestinians Will Have Autonomy – Not Sovereignty

Defense Minister Ya’alon says a political separation between Israel & Abbas’ PA has already come about, and he calls for demilitarized autonomy for the Palestinian Authority.

The Palestinian Arabs will not have a “state” but rather an “autonomy”, Defense Minister Moshe Ya’alon told the Israel Hayom daily newspaper in an interview published Wednesday.

“Our efforts to create shortcuts over the last two decades — from Oslo until present day — have all failed,” he said. “We know how to live with it. It is certainly not necessary to control them. We can give them political autonomy like they have now,” said Ya’alon. Continue Reading »

Contrary to Popular Thought Israel is Not Facing Demographic Threat

From Khameini to Obama, even Netanyahu,  is using flawed data to maneuver Israel into a 2-state solution

From the American secretary of state to left-wing Israeli politicians to the mullahs of Iran, many subscribe to the notion that if Israel does not surrender the “West Bank” for the creation of a Palestinian state, it will be overwhelmed by an Arab population that will destroy the Jewish character of the state.

Not so, argued an Israeli expert citing such reputable sources as the Israel Central Bureau of Statistics and the CIA World Fact Book. Continue Reading »