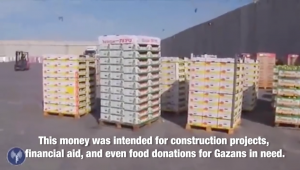 Israel exposed World Vision’s Gaza branch leader Muhammed al-Halabi for funneling 60 percent of his annual humanitarian aid budget into Hamas’ military wing. Although al-Halabi has already been arrested, the extent of the damage, both to security and to humanitarian causes, has yet to be assessed.

Israeli legal organization Shurat HaDin says it blew the whistle on World Vision years ago – but no one was listening:

According to Shurat HaDin President Nitsana Darshan-Leitner: “World Vision has repeatedly denied our charges and refused to seriously investigate where its funds are going. They assured us that the organizations they fund had been vetted and were not engaged with terrorism.

“Who knows how many of Hamas’ missiles and stabbing attacks were funded by World Vision after they were put on notice that there were financing Palestinian terror? The assistance to Gaza by foreign aid organizations is directly responsible for the murder of scores of Jews in Israel.”