LONDON – A BBC documentary examining the role of Jerusalem’s light railway in redefining the capital’s demography has come in for strong criticism after it depicted a city in which Israelis have used the tram line to strengthen their grip over the Palestinians. 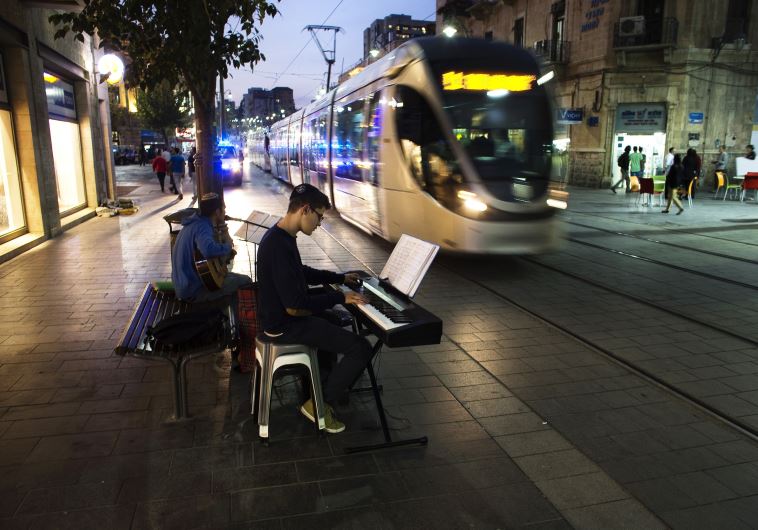 The 30-minute documentary in the BBC’s flagship Panorama series, contentiously titled “The Train that Divides Jerusalem,” was described by the publicly financed corporation as being aired on the anniversary of “last summer’s brutal conflict in Gaza” in which a “filmmaker, Adam Wishart” visited Jerusalem to ride on the city’s so-called ‘controversial train.’ In the pre-broadcast publicity blurb, the BBC added that, with only 9 miles from start to finish, some had hoped it could help heal divisions between Israelis and Palestinians, “but as Wishart discovers, it has only deepened the sense of resentment on both sides.”

The BBC added that, walking through Jerusalem’s Old City, he came “face to face with the battle over one of the world’s holiest sites and asks could it be the flashpoint for the start of another war?” What the blurb failed to announce was that Wishart, an award winning documentary maker, is Jewish but has an understanding about Israel which places him very strongly in the pro-Palestinian’ camp.

The program, which had its first broadcast last Monday evening, pulled in an estimated 1.7 million viewers, which a BBC representative told The Jerusalem Post is an average audience for such broadcasts.

What was also disclosed later the following day was that the BBC had received 24 complaints.

Fair enough? Well, after such a controversial examination of the conflict over Jerusalem, it would be inevitable that many more complained.

However, the BBC has a strict policy in dealing with such complaints, triggered in part by the constant (and in this journalist’s view, often unjustified) barrage of criticisms aimed at the BBC virtually every time Israel is in the news, by so called pro-Israel lobbyists, who urge followers to flood the BBC with complaints.

This has led the BBC to decline to give out complaints figures “when there has been evidence of lobbying or where media coverage has influenced the number” and it is known from internal leaks within the corporation that far less concern is taken after such organized campaigns.

Wishart, 46, said his parents were proud Zionists, and he admitted he had toured Israel with a Zionist youth group 31 years earlier. But he soon demonstrated that he now believes the train is not only divisive, but that its route had been planned only to serve Jewish settlements such as Pisgat Ze’ev and was not aimed at helping Palestinians cross the city or access hospitals, shopping malls, and the like.

Interviews with people like Rivka Shimon – a prominent member of the Women’s Forum for the Temple, which claims the right to rebuild the Temple regardless of which Arabs are in the vicinity – didn’t help either. A peripheral figure in Jerusalem politics, not even she could claim to represent mainstream Israeli thinking in the capital.

Other interviews in a similar vein also distorted the image of most Jerusalemites. Even snippets from Mayor Nir Birkat failed to balance the impressions in the documentary about Israeli intentions.

Luke Akehurst of the We Believe in Israel advocacy group in the UK made clear his displeasure, branding the program “inaccurate and biased.”

He added that the significance of fringe Jewish groups was exaggerated. On the other hand, “The role played by Palestinian extremist groups and incitement in both bringing about and celebrating deadly attacks on Israeli civilians was overlooked.”

The BBC had no response when questioned by the Post as to what controls had been deployed to ensure the program was balanced, and whether it would consider commissioning a further documentary showing the other side of the argument about Jerusalem. All the spokeswoman would say was that the program “explored the tensions in Jerusalem through the eyes of a British Jewish filmmaker, reflecting what he witnessed in the city and heard from a range of voices expressing alternate views.”

Yiftach Curiel, spokesman at London’s Israeli Embassy, told the Post that the program presented one of the most biased accounts of Israel in recent memory. “It builds a largely fictional narrative, by utilizing marginal voices in Israeli society and presenting them as ‘mainstream’ while at the same time sidelining Palestinian terrorism and incitement.”

Life in Jerusalem, he added, is indeed complex and challenging, “and deserves in-depth analysis, which this program fails to deliver.”