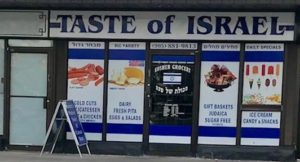 About a week after the anti-Israel agitator posted videos on his Facebook page calling for a boycott of Toronto businesses that support Israel, the owner of one of the targets of his campaign, the Taste of Israel grocery store, said sales had more than doubled.

And if the comments section of his pro-BDS Facebook page are any indication, the response there didn’t go so well, either.

Many of the commenters commended al-Najim for telling them about businesses they can patronize. Others took aim at BDS, calling it anti-Semitic and propagandistic. One person came up with the catchy phrase, “they do the labelling, we do the buying.”

The online trolling came in response to a boycott call by a group called Canadian Defenders for Human Rights (CD4HR), which is managed by al-Najim.

Al-Najim has been known among Toronto’s Jewish community since at least mid-July, when B’nai Brith Canada issued a news release saying it had complained to Toronto police after al-Najim was allegedly filmed confronting a wheel chair-bound Jew in G. Ross Lord Park.

A guy from downtown came to my store. He did shopping and for solidarity with Israel. A lot of people are coming – Christians, not just Jews.

B’nai Brith indicated it had received complaints that al-Najim “had harassed Jewish seniors in G. Ross Lord Park, but those interactions were not video-recorded.”

Al-Najim’s Facebook page described the rationale behind the CH4HR campaign in an Aug. 26 post: “We call for a legitimate & powerful BOYCOTT of the Israeli products & interests in #Canada. #Israel must be punished and feel some repercussions for all the human rights violations, breaches of international laws, massacres, wars, plundering of resources/land, evictions, terrorism & all kinds of violations on neighboring sovereign countries.”

One product CD4HR wants boycotted is Sabra brand hummus. Another is what the group describes as, “(Shoham) inorganic pomegranates. They can be found in Costco and many other stores.”

Another post on the same Facebook page calls on supporters to “Boycott Gasner Dental,” a dental clinic in the heart of the Jewish community.

That boycott call is accompanied by a photograph of the clinic taken when it featured a large poster announcing that it “proudly supports Walk With Israel,” the solidarity march that was held in May.

In one of the posts calling for a boycott of Taste of Israel, the organization noted a visit to the premises by Liberal MP Michael Levitt, in the company of Israeli MK Sharren Haskel.

It described Haskel, a member of the Likud party, as “a war criminal representative.”

“This restaurant operating in our beautiful peaceful diverse GTA region, steals the Palestinian cuisine and also promotes a flag of a occupier regime that imprisoned, killed and evicted the Indigenous peoples of the holy land. Boycotting such things and places is essential to all human rights defenders and will always succeed as long as the intention and goal is for the better of the world,” read one of CD4HR’s posts.

Taste of Israel, however, is not a restaurant. It is a small mom-and-pop grocery store that carries a range of Israeli products.

Gabriel Bolotin, who has operated the store for 14 years, said about half the products in the store come from Israel, with the rest being sourced from Canada, the United States and Europe. All are kosher.

Gabriel Bolotin shows off some of the Israeli products he sells at the ‘Taste of Israel’ grocery store in Thornhill, Ont. – Photo: CJN [unattributed]

Bolotin, a native of Saint Petersburg, Russia, said he was made aware of the boycott campaign by friends and customers who saw it online.

A day later, the Canadian and Israeli parliamentarians toured the store. He was also visited by local MP Peter Kent and representatives of the Ontario legislature.

His business has since grown rapidly, with old and new customers visiting him to show their support.

“A guy from downtown came to my store. He did shopping and for solidarity with Israel. A lot of people are coming – Christians, not just Jews – to make solidarity,” he said.

“I feel it’s very good. When it happens, it was something not comfortable. You never know what people can do. But people came to my store non-stop. It’s amazing.”

Ironically, among his customers over the years have been Israeli Arabs and others from Gaza, who come to purchase Israeli-made snacks. “They like Bamba,” he said, referring to an Israeli peanut butter-flavoured snack.

Meanwhile, the Centre for Israel and Jewish Affairs (CIJA) credited its “BUYcott” campaign for helping stores like Taste of Israel resist BDS.

“This is yet another example of how BUYcott is having a real impact,” said Noah Shack, CIJA’s vice-president of the Greater Toronto Area. “This is a stunning slap in the face to BDS activists. Once again, through the power of BUYcott, we have succeeded in demonstrating that those who target Israelis will ironically achieve the opposite of their intended goal.”