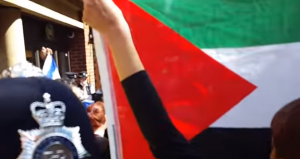 “The Jewish community is pleased that the event was canceled,” a spokeswoman for the Bonn Jewish community told The Jerusalem Post. Nearly 1,000 members belong to the organization in the North Rhine-Westphalia city of some 311,000 people.

The Bonn-based Pfennigsdorf Foundation planned to host a talk by former pastor Martin Breidert titled, “For Human Rights and International Law in Palestine – What Does BDS Want?” The speaker is widely viewed as antisemitic and an aggressive hater of the Jewish state.

According to Werner Ballhausen, head of the Citizens’ Foundation in Bonn, the event was canceled because Pfennigsdorf executive director Manfred Lohmann became ill. Pfennigsdorf works with elite institutions in Bonn, including the foundation and Bonn’s cultural history museum on social projects unrelated to Israel.

Ballhausen told the Post he rejects BDS and opposed the event.

Dr. Efraim Zuroff, head of the Jerusalem office of the humanrights NGO Simon Wiesenthal Center, said, “We welcome cancellations of BDS events which serve as camouflage of antisemitism and hatred of the Jewish people.”

Zuroff, the organization’s chief Nazi-hunter, added that Breidert is “a notorious antisemite and BDS propagates antisemitism and has no place in Germany.”

In a separate event that will feature BDS speakers in June, Bizhan Alkanaan, a spokesman from the Ka Eins conference center in Frankfurt emailed the Post on Monday, saying the venue pulled the plug on hosting the anti-Israel event, titled “50 Years of Israeli Occupation.”

He did not provide a reason.

Bonn has been plagued by boycott activities targeting Israel and its products over the years. The BDS-Bonn group where Breidert is active conducted three inspections in 2015 and 2016 in the Galerai Kaufhof department store to see if Israeli products were labeled as originating from settlements.

The Islamist head of BDS South Africa, Farid Esack, delivered a BDS talk in January at a Catholic family education center in Bonn.

Esack has participated in fund-raising events with Leila Khaled of the Popular Front for the Liberation of Palestine in 2015. The European Union and the United States have classified the PFLP as a terrorist organization.

“This is a man [Farid Esack] who expressed antisemitic statements and who is sympathetic to Holocaust denial. A person with such views has no place as an educator in a university, in particular not in Germany; due to both professional as well as moral and probably also legal reasons,” an official at the Israeli Embassy in Berlin told the Post in January.

A Jewish community executive board member told the Post last week: “We Jews in Bonn remember on November 10 the atrocities of Kristallnacht [the “Night of the Broken Glass” 1938 pogrom].This remembrance day should call attention to what can happen if one does not nip things in the bud. It began with a public call: ‘Don’t buy from Jews.’” He added, “The continuation and the consequences are sufficiently known. In this respect, we are of the view that any appearance from representatives of BDS groups – and those sympathetic to BDS – are not only anti-Israel, but tainted with antisemitic tendencies.”

Emails from the Post to Lohmann and Breidert were not immediately answered.