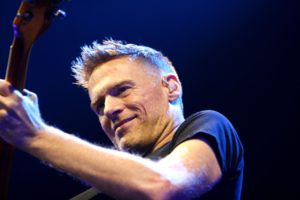 The Canadian rocker belted out hit after hit to the sold out crowd of 12,000 strong who sang along to every word. Monday night was the first of three shows for Adams – a second is slated for Tel Aviv Tuesday and a third in Jerusalem’s Payis Arena on Wednesday.

Adams, 58, seemed to thrive off the crowd’s energy and singing, repeatedly turning the mic to the audience and grinning broadly when they knew every word. He only had to strum the first chords of his 1984 hit “Heaven” and hold the microphone stand up to have the whole stadium singing along.

Almost without taking a breath, Adams and his band powered through his impressive series of hits along with a couple songs from his newest album Get Up. The whole band was adorably and homogeneously clad in the same dad chic outfit of a crisp white shirt, black blazer, jeans and wingtips.

Guitarist Keith Scott was by his side the whole time and grinning just as joyfully, with Mickey Curry on drums, Gary Breit on keyboards and Norm Fisher on bass completing the ensemble. From “Run to You” to “Summer of 69,” “Cuts Like a Knife,” “Have You Ever Really Loved a Woman” and “Everything I Do (I Do It For You),” Adams gave it all his energy, swapping all night between three different guitars. The acoustics in the arena and the sound system made it a little hard to hear the words on some of the more powerful songs.

But on some softer numbers, and especially when it was just Adams and his guitar, his signature sexy, raspy voice was as strong as ever.

Adams had clearly received a rudimentary Hebrew lesson to utter not just the requisite “Shalom Tel Aviv” but also “hakol sababa” and “toda raba.” Before the upbeat number “You Belong To Me” off his latest album, he said he wanted to tell the crowd to “shake your ass” – but he didn’t know how to in “Ivrit.”

One front-row fan gamely offered up his translation, and on the second try Adams successfully requested they “tazizu et hatachat.” It doesn’t matter that this is the same shtick he pulls around the globe – in that moment he had the crowd eating out of the palm of his hand.

This is Adams’s first time ever performing in Israel, after a somewhat rocky relationship with the Jewish state. In 2007, he was scheduled to headline two major concerts in Tel Aviv and in Jericho under the auspices of the OneVoice NGO. The organization ultimately canceled the shows due to security concerns in Jericho.

Then in 2014, amid the Gaza War, Adams wrote on Twitter that the Israeli action in the conflict was a “crime against humanity” and that there was no “justification for murdering 2000+ people…541 kids.”

Adams didn’t drop a word or hint of politics during Monday night’s show, and it didn’t matter. He had the crowd hooked from the first “shalom.”

After completing the rocking setlist, including “This Time,” “Please Stay,” “Cloud Number 9,” “The Only Thing That Looks Good on Me Is You” and “18 Til I Die,” Adams still wasn’t done.

He returned to the stage for a four-song encore, which included an acoustic “Straight From the Heart” that had the crowd swooning. Then he wrapped things up all alone on stage with the 1993 song “All For Love,” which he dedicated to his writing partner Michael Kamen, who died in 2003.

“He was Jewish,” said Adams, “And I know if I told him I’d be playing in Israel he’d want to be here with me.”