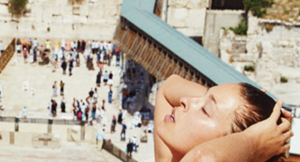 Belgian model Marisa Papen poses naked at Judaism’s sacred place for backdrop, seeking to ‘break the walls’ for freedom, but takes much care not to capture the Temple Mount or the Dome of the Rock in her publicity stunt.
– WARNING: Viewer Discretion Advised

Belgian nude model Marisa Papen recently posed in full frontal nudity on the background of the Western Wall, the most sacred place to Judaism which is visited by hundreds of devout believers every day.

The artistic photos are currently displayed in the “Road to Liberation” exhibition at the Frank Rose Gallery in Knokke, Belgium.

Papen, 26, who poses nude all over the world, arrived in Israel to celebrate its 70th Independence Day. The unconventional photos were taken on the day of the US Embassy inauguration in Jerusalem five weeks ago.

Papen explained her choice to pose naked at the Western Wall as a way “to break the walls.”

The rooftop on which Marisa Papen posed nude – Unattributed (Ynet)

Mathias Lambrecht, 26, was the photographer who took the nude photos, which are on display in Belgium until the end of September.

Lambrecht made sure not to capture the Temple Mount and the Dome of the Rock—likely out of consideration for Muslims who consider those sites holy.

He was less concerned about hurting Jewish feelings, making an effort to capture only the Western Wall as the nude photos’ background.

Jerusalem resident Alex Tenzer said he had been in shock when he first saw Papen’s nude photos in the Western wall. “It’s insane, only a sick person can pose naked next to the Western Wall,” he said.

The nude model clarified she was aware the photos could appear as provocative in the eyes of some people. However, she said she sought to show that each person—man or a woman—had the right to choose in what to believe in with the main issue being freedom of choice.

Papen added that Jerusalem was a mixed multicultural city sacred to all three religions, with secular citizens residing in it as well.

Lambrecht, who was photographed with Papen while holding the the controversial nude photo, said: “Our message is that (the value of) freedom is above all other. The way Marisa chooses to live her life reflects that message. She was perfect to be part of the Road to Liberation exhibition.”

Western Wall Rabbi Shmuel Rabinovitch called the incident “shameful, grave and unfortunate,” saying it “harms the sanctity of the site and the feelings of those visiting the holy places.”

Papen says she received many hateful letters and was attacked in the social media with posts such as “Burn in hell.”

She immediately posted an article titled “The wall of shame” on her website.

“I know my mailbox is about to fill up with threats and angriness (sic) again—to all the people typing down their furiosity (sic) right now, save your energy. I don’t even open them,” she wrote on her website.

“I knew that I wanted to push the boundaries of religion and politics even further,” she added in reference to the night she had spent in an Egyptian jail in September 2017 after posing naked at two of Egypt’s most prominent sites—the Great Pyramid of Giza and the archaeological city of Luxor.

She was detained for questioning for several days and then released.

“Breaking down the walls that have been built to keep all our wandering souls on this planet somehow under control. With other words, showing my personal religion in a world where freedom is becoming a very luxurious thing,” the Belgian model lashed out.

Papen said that photographer Mathias Lambrecht documented the value of freedom she wanted to convey during a three-day trip to Israel that included visits to the Dead Sea, Tel Aviv, and Jerusalem.