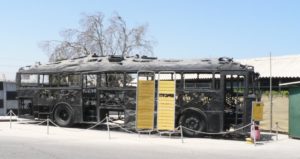 The move reportedly followed several appeals from Brussels to the PA to change the name of a Belgian-funded school named for Dalal Mughrabi located in the West Bank city of Hebron.

Mughrabi was a member of the Palestinian Liberation Organization (PLO) Fatah faction who led a joint Lebanese-PLO attack in Israel’s north dubbed the 1978 Coastal Road massacre, in which 38 Israeli civilians were killed, 13 of them children.

“As long as school names are used to glorify terrorism, Belgium can no longer cooperation with the Palestinian Education Ministry and will not give out budgets for the constructions of schools,” the ministry statement said.

In October 2017, the Belgian government froze its 3.8 million aid package toward the construction of two PA-administered schools in the West Bank following reports that the school was still named ‘The Martyr Dalal Mughrabi Elementary School’.

The school, built in 2013 using Belgian funds, was renamed in honor of Mughrabi, though it was initially called Beit Awwa Elementary School for Girls when it first opened.

On March 11, 1978, a PLO terrorist cell led by Dalal Maghrabi sailing from southern Lebanon landed on a beach in northern Israel where they proceeded to walk to the Coastal Road that stretches from Haifa to Tel Aviv.

First, the terrorists hijacked a taxi, killing all occupants, and drove south toward where their originally intended to landing point: Tel Aviv.

The terrorists managed to reach the Glilot Junction before being stopped by a police roadblock on the northern edge of Tel Aviv, after taking two busses and their occupants hostage along the thirty-mile stretch.

At the junction, a fire-fight ensued between the terrorists and Israeli police before the group’s attack was finally thwarted. The police who were not specifically trained in anti-terror hostage situations and provided the only immediate response.

37 Israelis and 1 American killed in total, including 13 children. 71 others were wounded in what is considered the deadliest terror attack to ever occur on Israeli soil.

The PLO later said the terror operation’s purpose was to derail peace negotiations between Egypt and Israel.

It did not succeed in doing this, but the massacre is widely seen as the final provocation leading Israel to invade Lebanon with some 25,000 IDF troops just three days after the attack was carried out.

Last year, Norway requested the return of funds provided to a West Bank women’s center when it renamed itself after Mughrabi.

Norwegian Foreign Minister Borge Brende harshly criticized the Palestinian Authority (PA) for use of the funds.

“Norway will not allow itself to be associated with institutions that take the names of terrorists in this way,” Brende stated. “We will not accept the use of Norwegian aid funding for such purposes.”

“The glorification of terrorist attacks is completely unacceptable, and I deplore this decision in the strongest possible terms,” he added.