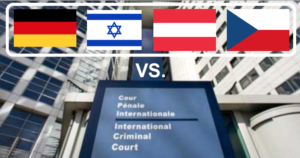 Germany offered to join the proceedings in the International Criminal Court (ICC) on Friday as a “friend of a court” — a party that is not part of the proceedings but is willing to put their information or expertise at the court’s service — alongside the Czech Republic and the Israeli Bar Association.

As reported by Haaretz, Germany backed the Israeli argument that Palestine does not meet the criteria for statehood and thus cannot forward a case to the ICC, since, under its charter, that is a prerogative of a state.

The same argument was made by Prague on Thursday, also as reported by Haaretz; Austria expressed its desire to join the proceedings on Friday.

Berlin is one of the key players within the organization, the newspaper notes, and thus, its voice is likely to hold some major sway on the matter.

The ICC is currently deliberating on whether it has the jurisdiction to proceed with a probe into alleged crimes committed on Palestinian territories after its prosecutor Fatou Bensouda announced there were reasonable grounds to proceed with the investigation.

She did note the question of jurisdiction, however, and relayed the matter to the Court to solve.

Palestine is technically a signatory to the Rome Statue — the founding charter of the ICC — but the question of statehood is looming large over the case it filed with the Court, and so is the fact that Israel is not signatory to the Statue.