According to Israeli business outlet Globes, US President Joe Biden’s administration has appeared much less enthusiastic about allocating a budget for regional products than his predecessor, former President Donald Trump, who along with his negotiation team, which his son-in-law Jared Kushner headed, was instrumental in establishing. 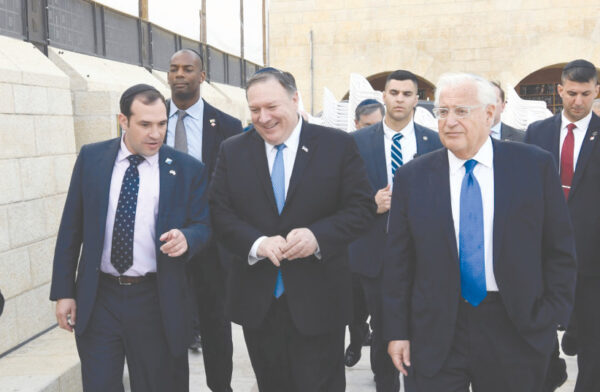 Rabbi ARYEH LIGHTSTONE (left) accompanied the previous US Secretary of State Mike Pompeo and Trump’s Ambassador to Israel David Friedman, on a visit to the Western Wall in 2019. – Photo:  MATTY STERN/US EMBASSY JERUSALEM

One of the potential stumbling blocks for American involvement is Biden’s focus on domestic issues, particularly the continued massive government expenditure in the wake of the response to the coronavirus pandemic. Israeli sources according to Globes, confirmed an unnamed senior US official who maintained that the fund was indefinitely frozen.

There are also tensions between the new Israeli government and the UAE.

Foreign Minister and Alternate Prime Minister Yair Lapid’s recent UAE trip – the first by an Israeli minister – was painted as entirely positive, although the Yesh Atid faction head irritated UAE business people when he failed to meet them.

The issues of the Haifa Port tender and the Europe-Asia Pipeline Co. (EAPC) are also potential points of division. UAE diplomatic sources revealed that they expected Israel – despite its new coalition government – to meet the previous Benjamin Netanyahu government’s commitments.