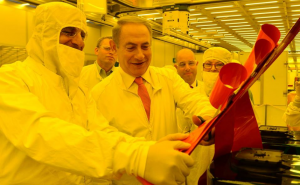 The 2019 Bloomberg Innovation Index advanced Israel from 10th place last year to 5th place this year as a result of better patent registration, outpacing the US, China, the UK and Japan.

Israel has been named as the fifth most innovative economy in the world, according to the 2019 Bloomberg Innovation Index.

Last year, Israel was ranked in 10th place but this year jumped to fifth place as a result of better patent registration, which has played a large part in its improvement in the rankings.

The 2019 Bloomberg Innovation Index was just published. It ranks economies according to their level of innovation.

Israel is number five on the new list – five places higher than we were ranked last year.

The Start-Up Nation came just ahead of Singapore, which ranked in sixth place while the US only made it to eighth place where it made it back into the top 10 after falling to 11th place last year. Faster product cycles and intensifying competition over 2018 were responsible for its return back into the top 10.

Japan fell to ninth place after being pushed out of sixth place by Singapore.

Bloomberg placed South Korea in first place for the sixth year running since the inception of the index in 2012, due to new investments in key technologies and a regulatory plan for encouraging startups.

Germany advanced into second place due to investment in production and research by many of its industrial giants, such as Volkswagen, Daimler, and Bosch. Third and fourth places were taken by Finland and Switzerland, respectively.

The world’s second largest economy, China, only just scrapped 16th place on the listing, while the UK lost to China for the first time, falling to 18th place.

Among 2019’s lowest ranked economies were Tunisia, South Africa and Ukraine, which fell out of the top 50. Ten economies joined the ranking in 2019 as more reliable data became available.

Mexico and Vietnam were ranked as the lowest in the Index taking 59th and 60th place respectively.

The list published on Tuesday comes as global elites meet at the annual World Economic Forum in Davos, Switzerland to discuss world finances, economies and globalization.

Following the publication of the rankings, Prime Minister Benjamin Netanyahu tweeted his elation.
“Israel is number five on the new list – five places higher than we were ranked last year,” he said. “Israel is a rising global power.”