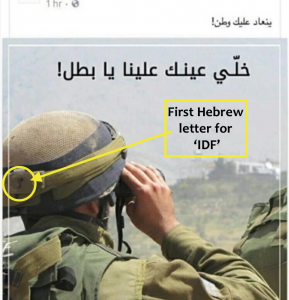 Finger-pointing, condemnations, and embarrassments follows an unforgivable gaffe when a social media post inadvertently uses photo of I.D.F. soldier in a celebration of Lebanese Army Day.

In an embarrassing gaffe, a Lebanese advertising company featured an image of an Israeli solider in a post commemorating Lebanon’s Army Day.

The original post commemorating Lebanon’s Army Day with an image of an IDF soldier  – Photo: Screenshot from Facebook

According to a report on the Walla news site, Virgin Ticketing Box-Office sparked a social media firestorm Monday, after an ad posted on its official Facebook page featured the image of an Israeli soldier, with the following caption: “Always keep your eyes on us, hero.”

Facebook users were quick to point out that the uniform and the corporal insignia on the soldier’s sleeve were not those of the Lebanese army. Although the post was taken down, the blunder went viral. Lebanese journalist Nour Samaha mocked the company on her Facebook page, writing, “Virgin celebrates Army Day … with a picture of an Israeli soldier!”

In a statement to Lebanese newspaper L’Orient-Le Jour, the company said, “Virgin does not manage its social media accounts. An external company specializing in social media does that, and the responsibility for this mistake is, unfortunately, theirs.” He said, “The picture was selected by mistake. This was not done intentionally.”