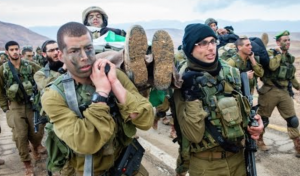 6 months ago, both Rio de Janeiro-born doctors Daniel Nigri & Benny London passed the Israeli medical board exams and then volunteered for the IDF
• Nigri, “I came to Israel during the 2nd Lebanon War & … had to come back here to contribute to its security.”

Childhood friends Drs. Benny London and Daniel Nigri, both 27, left their native Rio de Janeiro to put their medical qualifications to good use in the Israel Defense Forces as lone soldiers currently stationed on the northern border.

London is the doctor assigned to the Shahaf combat intelligence battalion, while Nigri is the doctor of the Nahal Brigade’s 50th Battalion. They are busy running their respective clinics, and don’t have much time to long for the beaches of Rio.

Drs. Benny London and Daniel Nigri: Our families are worried, but support us and are proud of us. – Photo: Ancho Gosh/JINI

The two men grew up together and attended the same school. Six months ago, they passed the exams qualifying them to practice medicine in Israel, and joined the military.

“We grew up in Zionist homes and studies at adjacent universities in Rio,” Nigri says. “When I was 18 I came to Israel during the Second Lebanon War, and as Jew I had a connection to the state and felt that I had to come back here to contribute to its security.”

“For me, making aliyah was a child hood dream,” says London, who has been adopted by Kibbutz Lavi in the Lower Galilee.

Both London and Nigri are aware of the dangers of serving in combat units and say their families are “worried, but support us and are proud of us.”

Tzvika Levy, head of the Kibbutz Movement’s Lone Soldiers Program, says the two doctors “are an amazing example of lone soldiers who are willing to give up a comfortable life in their native countries to make aliyah and serve in combat roles. I salute them for their sacrifice and their willingness to contribute to the state.”