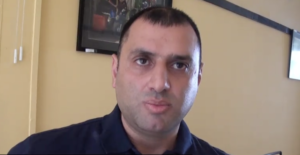 Suheib Yousef, son of the co-founder of Hamas, Hassan Yousef, exposed the terror’s group underside and rampant corruption to an Israeli journalist on Wednesday. Suheib, fed up with the duplicity he was privy to at his senior position for Hamas in Turkey left the organization a month ago, fleeing to an unknown location in Asia.

The goal of the attacks in the West Bank is to kill civilians, not for resistance, or Jerusalem, or liberating Palestinian land and not even because they hate Jews.

Suheib is the younger brother of the “Green Prince,” Mosab Hassan Yousef, who worked undercover for the Shin Bet for ten years, preventing scores of suicide attacks and assassinations, and even providing information that led to the incarceration of his own father. Mosab, now a resident of the US, wrote a book about his experiences called Son of Hamas.

“Hamas is part of me since childhood. I grew up in Hamas and worked for it, but when I was exposed to the corruption, I left them and cut off contact with them,” Suheib said.

Yousef, from the security of his hiding place in Asia, contacted the Palestinian affairs correspondent for Israel’s Channel 12, Ohad Hemo, to tell all. The interview was broadcast on Channel 12 on Wednesday.

Yousef said that Hamas gathers intelligence information in Turkey but it “isn’t for the Palestinian cause,” but is sold “to Iran in return for financial assistance,” adding that the money from Iran is transferred through Turkish banks.

He explained that the Turkish branch of Hamas recruited people, including children to carry out terror attacks in Israel. “The goal of the attacks in the West Bank is to kill civilians, not for resistance, or Jerusalem, or liberating Palestinian land and not even because they hate Jews. They send these innocent people because they want to export the crisis [from Gaza] to the West Bank.”

“If Hamas gave up power, there would be no problems,” he said, calling Hamas “a racist terrorist organization that is dangerous for the Palestinian people.”

Yousef also expressed anger and revulsion at the behavior of senior Hamas members in Turkey, who live in luxury at the expense of the Palestinian people. “Hamas senior officials live in fancy hotels and luxury buildings, their kids are in private schools. They’re paid generously by Hamas, earning between $4,000 to $5,000 a month. They have security guards, swimming pools and country clubs. They eat in high-end restaurants, paying $200 for one course, while a family in Gaza lives on $100 a month.”

“I want them to send their own children to carry out attacks,” Yousef said. “Why doesn’t Ismail Haniyeh go to the fence to throw stones?” he said, referring to the weekly March of Return protests by the Gaza border fence organized by Hamas.

Despite Yousef’s defection and scathing censure of Hamas, he separated his actions from those of his brother, Mosab. “Unlike my brother, I never worked for Israel,” he said. “I never betrayed [Hamas], I was loyal to them.”

as a light unto the nations…