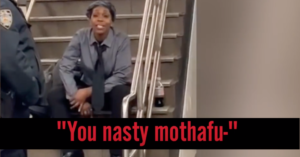 Footage of the incident, filmed in late December, shows 38-year-old Zarinah Ali using anti-Semitic epithets including “You f***in’ nasty a** Jews” and “You stinking a** Jew” before assaulting Israeli national Lihi Aharon.

The footage was captured by Aharon’s friend, according to The Jewish Telegraph Agency (JTA).

According to court documents, the incident began when Ali allegedly started to verbally abuse Aharon and an unidentified Orthodox Jewish man as they rode the New York City subway.

“She was yelling at him, shouting at him, ‘Allahu Akbar’ [God is most great] and ‘Allah will kill you,’ ‘nasty Jews,’ she was citing clauses from the Quran and ‘when you see a Jew you got to kill him’ and she used a lot of profanity,” Aharon later told Fox News in an interview.

Aharon said things escalated after she started recording Ali with her phone, who physically smacked the device out of her hand, then grabbed and pulled on Aharon’s face and scratched her until she bled, according to JTA.

Police eventually arrested Ali and initially charged her with assault.