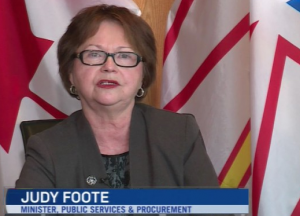 Public Services and Procurement Minister Judy Foote, who oversees Canada Post, made the decision less than two months after a human rights complaint accused the government and the postal service of “regularly and knowingly delivering misogynist, racist, anti-Jewish, anti-Muslim, and homophobic hate propaganda.”

For the past year the paper, Your Ward News, has been distributed for free by Canada Post to a purported 305,000 homes and businesses in Toronto, despite objections from residents and postal workers.

In the April human rights complaint, Ottawa lawyer Richard Warman saidYour Ward News is “replete with bigotry,” while the Canadian Union of Postal Workers repeatedly said its members shouldn’t be obligated to deliver the paper.

In one incident last year, the newspaper displayed several images mocking religious Jews (including one with a long nose), with one of them saying, “Here the Holocaust is repeating itself.”

The newspaper also claimed that the media are controlled by “Zionist Marxists,” and implied that Israel was responsible for not only the September 11 attacks but also the January 2015 Charlie Hebdo shootings.

At that time, the Centre for Israel and Jewish Affairs (CIJA) filed a formal complaint with the Toronto Police against Your Ward News.

“I don’t think any of the letter carriers delivering this garbage were happy about it,” said Canadian Union of Postal Workers president Mike Palecek said, following the instruction to stop the delivery of the paper.

“It really shouldn’t have taken the minister’s intervention. Canada Post should have done this a long time ago,” he added, according to The National Post.

The minister’s order effectively stops Canada Post from delivering mail from by Your Ward News editor-in-chief James Sears, or two of his associates.

“Canada Post will not deliver this disturbing publication as long as the interim order remains in effect,” Minister Foote said in a terse statement Tuesday.

Sears, the editor-in-chief, called the move an “Orwellian order” and wrote to the minister to request a review.

“I was not aware that Canada is now under Napoleonic law,” Sears wrote in an email, which he provided to the National Post.

Foote, for her part, told Sears she believed he was sending “hate propaganda” in contravention of subsection 319(2) of the Canadian criminal code, which prohibits the wilful promotion of hate — a serious and rarely prosecuted crime.

For its part, the Toronto police said in April that an investigation into Your Ward News found no evidence of a hate crime.