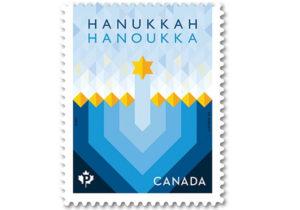 The Canada Post Hanukkah stamp features a geometric design of a Jewish Menorah, that symbolizes the rededication of the Second Temple in Jerusalem, following the victory of the Maccabean Revolt over the Greeks in the 2nd century BCE.

Alongside the usual candles, donuts and dreidels that traditionally mark the holiday of Hanukkah, Canada Post is adding a stamp recognizing the Jewish “festival of lights” to this year’s celebrations.

The stamp features a geometric design representing different types of menorahs and a strong contrast between light and dark, creating the appearance of flickering candles.

Those wishing to purchase the special stamps will be able to buy online on November 20, and in Canadian post offices later in the week.

In addition to annual Christmas-themed stamps, the release of the Hanukkah stamp joins a series of Canada Post stamps issued for other major celebrations this year. In May, Canada issued an Eid stamp to recognize the two important Muslim holidays. In September, Canada Post teamed up with India Post to issue Diwali-themed stamps.

According to Canada Post, the various stamps depict “pride in Canada being a land of enormous diversity.”

The Hanukkah holiday remembers the rededication of the Second Temple in Jerusalem following the victory of the Maccabean Revolt over the Greeks in the second century BCE.

This year, the eight-day festival will begin at sunset on December 12.