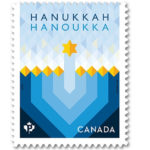 The Canada Post Hanukkah stamp features a geometric design of a Jewish Menorah, that symbolizes the rededication of the Second Temple in Jerusalem, following the victory of the Maccabean Revolt over the Greeks in the 2nd century BCE.

Alongside the usual candles, donuts and dreidels that traditionally mark the holiday of Hanukkah, Canada Post is adding a stamp recognizing the Jewish “festival of lights” to this year’s celebrations.

The stamp features a geometric design representing different types of menorahs and a strong contrast between light and dark, creating the appearance of flickering candles.