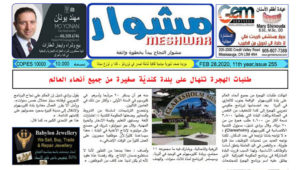 The Feb. 28 edition of al-Meshwar dedicates a half-page to “The Abuse of the Martyrs and the Manipulation of Their Bodies Are Jewish Commandments and Israeli Directives” by Mustafa Yusuf al-Lidawi, B’nai Brith Canada wrote in a statement Tuesday.

According to al-Lidawi’s Facebook page, he serves as a member of Hamas’ Department of Arab and Islamic Relations.

In the article, al-Lidawi falsely accuses Israel and blames it on the country’s “ancient malice, and Talmudic and Torah commandments.”

B’nai Brith Canada has reached out to Toronto Police in order to file a complaint.

“It is unacceptable that Canadian publications, in any language, continue to demonize Jews and glorify terrorism,” said Michael Mostyn, chief executive officer of B’nai Brith Canada. “These relentless and baseless attacks on our community undermine inter-communal relations and increase the risk to our safety.”

Over the years, articles in al-Meshwar have praised a 2014 massacre at a Jerusalem synagogue, called Judaism a “terrorist religion,” blamed Jews for the Holocaust and glorified suicide bombings, according to B’nai Brith.