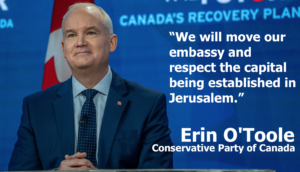 “This was a commitment I made several years ago,” he told reporters. “Israel is a close ally of Canada, a friend, a democracy in a place in the world that needs more democracy.

“And we will move our embassy and respect the capital being established in Jerusalem. We will exhibit leadership. It’s important for Canada to once again emerge on the world stage as a country that will stand by our values, that will be a defender of human rights, and will commit to a strong, principle-based foreign policy,” he said.

At the same time, O’Toole stressed that the move would not contradict a two-state solution between Israel and the Palestinians.

Relocating the embassy to Jerusalem is also part of the Conservative Party of Canada’s manifesto.

The federal elections are slated to take place on September 20. Earlier last week, the Angus Reid Institute, Léger, Abacus Data and Ipsos all released figures indicating that the Liberals had lost ground during the first week of the campaign.

It was current Canadian Prime Minister Justin Trudeau’s initiative to hold snap elections, a decision he made when polls were in his favor. However, since then, he has been criticized by the public for mishandling the coronavirus pandemic and the country’s economic situation.

The election comes as Canada is experiencing a new wave of COVID-19 cases, driven by the Delta variant of the coronavirus. Trudeau called it “the fourth wave amongst unvaccinated people.”

This report is appalling. As Conservatives have been saying for months, UNRWA needs to address this recurring problem in their schools and remove employees who incite antisemitism and hate against Jews. This cannot be allowed to continue. https://t.co/9yZXPQZaJC

Trudeau isn’t as popular as he once was, but his government’s handling of the pandemic has been widely viewed as a success. But if the result is another minority government, the “knives will start to come out,” said Robert Bothwell, a professor of Canadian history and international relations at the University of Toronto.

“Trudeau is not widely liked. He’s what the Liberals have so they will fall in behind him, but if he loses he’s toast,” Bothwell said.

Four countries currently have their embassies located in Jerusalem – the United States, Guatemala, Kosovo, and Honduras.