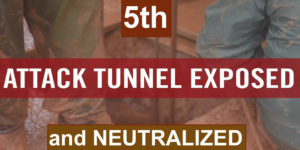 IDF drone-cam: The cement used to fill and neutralize Hezbollah’s attack-tunnels on the Israeli side came leaking out of the tunnel from several places in the southern Lebanese village of Kafr Kila.

Twenty-three days after Israel launched Operation Northern Shield and found the first tunnel dug into northern Israel from southern Lebanon by Hezbollah, the military has completed the destruction of a number of tunnels which infiltrated close to the community of Metula.

According to IDF Spokesman Brig.-Gen. Ronen Manelis the military destroyed the tunnels by filling them with material which would prevent the Shiite terror group from every using them again.

Material used by the IDF is photographed leaking out of a building in Lebanon. – Photo: IDF Spokesperson’s Unit, Illustration: IsraelandStuff/PP

The material he said, has come out of the tunnel in several places in the southern Lebanese village of Kafr Kila where the tunnel was dug from, including in a residential building next to the border fence which was used to make bricks.

“This fact indicates Hezbollah’s use of civilian structures in the heart of an urban area in southern Lebanon, in flagrant violation of Resolution 1701 and endangering its citizens by using them as human shields,” the military said in a statement.

“It is clear that this factory belongs to Hezbollah and was used to build tunnels,” Manelis said, adding that there were other locations in Kafr Kila which were connected to tunnels and therefore the IDF saw material come out in several locations, including into residential homes.

The operation which began on December 4 to find and destroy the tunnels dug by the Shiite terror group has so far found five cross-border attack tunnels and last week the military began the process of destroying them.

On Wednesday, the military announced that it had destroyed a fifth cross-border attack tunnel crossing into northern Israel from the southern Lebanese village of Ayta as-Shab. It was discovered several days ago and destroyed by an explosion Wednesday night.

WATCH: IDF officer calls out in Arabic to the residents of the Lebanese Shiite village of Ayta ash-Shab, warning them to clear the area prior to the demolition of an attack tunnel dug by Hezbollah from underneath their village into Israeli territory. pic.twitter.com/s08zkXnXQc

Another tunnel found by the military, outside the community Zarit across from the southern Lebanese village of Ramiyah, was destroyed by an explosion.

A senior officer taking part in the operation told reporters Monday that due to the unique characteristics of each tunnel, the method in which they are destroyed is determined by their route and the type of soil they are dug into, not according to how it might affect the other side.

“If the destruction of a tunnel blows the house on the other side, and this will be the best way to destroy the tunnel, this is the method that will be chosen,” he stated.

Unlike the tunnels dug by terror groups in the Gaza Strip, each tunnel found by the military on the Lebanese border has different characteristics, with some strengthened by concrete while others are burrowed straight into the rock.

“We found one tunnel that resembles a Hamas tunnel because of it’s route, but the rest of the tunnels are five stars… something that Hamas could only dream of, with ventilation shafts and electricity,” one senior IDF officer said.

Another senior IDF officer stated that the experience gained by the military in dealing with the tunnels from the Gaza Strip was critical to the success in the operation.

WATCH: We neutralized this attack tunnel dug from Lebanon into Israel by Hezbollah and poured cement into the openings on the Israeli side. The cement spilled out of the opening on the Lebanese side – revealing it was dug between homes and a factory. pic.twitter.com/KKXGIsqxW3

While the military has refused to disclose the exact depth of the tunnels, they released that some of the tunnels were six feet wide and six feet tall and have reached at least 80 feet underground.

According to another senior officer, the size and depth of the tunnels surprised the IDF.

The attack tunnels, Manelis told reporters on Thursday, were built as a classified component in Hezbollah’s “Conquer the Galilee” plan that would have allowed Radwan fighters to infiltrate Israel on land, firing short-range rockets and mortar fire, and allow other Radwan fighters to infiltrate into communities around Metula, cut it off from Route 90 and kill as many civilians and troops as possible.

Another senior IDF officer in the Northern Command said that every tunnel found by the military would have had a specific part in Hezbollah’s attack against Israel.

According to another senior officer,  Hezbollah dug their tunnels into areas which would have allowed them to infiltrate into Israel quietly where they could prepare their attack.

“They do not have shaheeds [martyrs] in Hezbollah. It’s not Hamas. They sanctify life, not death. They did not dig their tunnels towards an open area near IDF troops, but in places where they could organize themselves,” he said, explaining that after being in a small compact place with low oxygen levels the militants would need time to recover.

Then, he said, “they would give orders and attack.”

“The IDF views the Lebanese government as responsible for the digging of the tunnels and for the consequences of its action. This is a serious violation of Resolution 1701 and the sovereignty of the State of Israel,” read a statement by the IDF Spokesperson’s Unit.

Earlier in the week Prime Minister Benjamin Netanyahu toured the area with other members of the Security Cabinet and heard progress reports by the Head of the Northern Command Maj.-Gen. Yoel Strick and other senior officers.

“The IDF presented us with its actions regarding the neutralization of the tunnels. This operation is almost entirely behind us,” he said, adding that “there is an extraordinary job here that has denied Hezbollah their tunnel weapons. They have invested greatly in this and we have destroyed it.”

While Netanyahu, who is also defense minister, said that the operation is almost over, the officers in the northern command told reporters that they would continue the operation as long as necessary.

“Anything that crosses one centimeter into Israel, I know how to put my hand on it” said one, adding that “we need time and nerves of steel. Just that.”